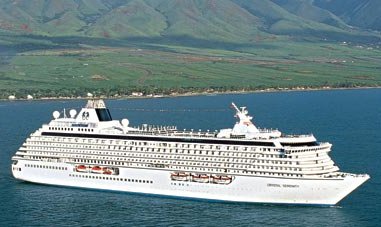 Lee Wachtstetter loves cruising. She loves it so much, in fact, that she has been living on a cruise ship for the past decade, first on a Holland America ship for three years, and then on the Crystal Serenity for the last seven years. Wactstetter, who becomes Mama Lee aboard the Serenity, abandoned Holland America the moment it cancelled its dance host program, which gave single passengers like Wachtstetter a partner for evening ballroom dancing. Holland America might regret their decision to abandon the program, considering that Wachtstetter now spends about $164,000 a year on Crystal Serenity, which is one of two ships in Crystal Cruises’ fleet of luxury vessels.

Clearly, Wachtstetter is a serious dancer, as we learned from the profile of her cruising life in Asbury Park Press, but what else does she do all year while sailing around on a cruise ship?

First and most obviously, she’s a globetrotter. She has been to well over a hundred countries, and in fact has basically been to every country that has a cruise port. Over the last 10 years of continuous sailing, she has been on about 100 cruises (although we suppose it is somewhat difficult to determine what counts as a “cruise” when the journey never ends). However, this only constitutes about half of her total lifetime cruises. Before her husband died and she took permanently to the sea (a woman can also be wedded to the ocean), she took 89 cruises. She has been to so many ports so many times that she rarely bothers getting off the ship any more. Instead, she enjoys the quite of a largely empty ship when everyone else goes ashore.

As Wachtstetter explained to Asbury Park, “The day before my husband died of cancer in 1997, he told me, ‘Don’t stop cruising.’ So here I am today living a stress-free, fairy-tale life.”

In her day-to-day life, she does a lot of needlepoint in the Serenity’s Palm Court lounge, but she certainly takes full advantage of the fact that she is living on a cruise ship. She eats at the regular and specialty restaurants on board, and often joins tables of eight for dinner to meet other passengers. She also goes to the captain’s cocktail parties, participates in whatever daily activities the cruise ship has planned, and attends shows, movies, and lectures regularly.

As we mentioned, before her husband died in 1997, he specifically told Mama Lee “don’t stop cruising,” and it is unclear if Wactstetter ever plans to. Having sold her home and the 10 acres it was built on, she can evidently afford the high annual bill of cruising, and she is able to keep in touch with family – three sons and seven grandchildren – because she travels with a laptop. She is also able to make contact with them when the Serenity stops by Miami, which happens several times a year.

So, she is living the good life, and may spend the rest of her life doing it. There are certainly worse ways to live out your days.

Article Name
86-Year-Old Woman Pays $164,000 a Year to Live on Luxury Cruise Ship
Description
Lee Wachtstetter loves cruising. She loves it so much, in fact, that she has been living on a cruise ship for the past decade.
Author
All About Cruises and More
Comments: 0 Posted by: Cruiser Evan Categories: Cruise Lines, Crystal Cruises