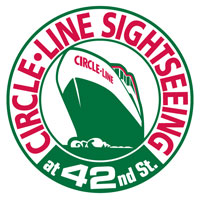 Circle Line cruises are not really cruises in the sense that we normally use the term. The cruises operated by Circle Line (which actually can be one of two companies) are basically sightseeing tours of New York City on a boat, not multiple-day journeys to far-off lands. The latter type of cruises – which are in fact just regular cruises to most people – are offered by cruise lines, and both the Circle Line companies are smaller, more regional enterprises than cruise lines. (We suppose it’s best that neither Circle Line is a proper cruise line, as then it might be called the Circle Line Cruise Line, which strikes as obnoxiously rhythmic.) As we said, Circle Line can actually refer to two different companies – Circle Line Sightseeing Cruises at 42nd Street and Circle Line Downtown – so in addition to explaining what Circle Line cruises are, we’ll also explain why two companies with the same basic name offer more or less identical services.

To begin with the second concern first, there are two Circle Line companies for the simple reason that the original Circle Line company split in two in 1981. Despite their shared heritage and name, and despite the fact that they operate in the same narrow industry, the companies are wholly separate from one another, managing different offices and employing different staffs. Apart from their slightly different names, the companies are primarily distinct in that they operate out of different piers. Circle Line Sightseeing Cruises at 42nd Street is based at Pier 83, whereas Circle Line Downtown sails out of Pier 16.

But even this distinction has become blurred, as Circle Line Downtown was purchased by New York Water Taxi in 2008. New York Water Taxi operates out of multiple spots along the city’s shore, including Pier 84 (right by Pier 83), so the territories of Circle Line Sightseeing Cruises at 42nd Street and Circle Line Downtown are very much intermingled. Obviously, the fact that there are two Circle Line companies is both confusing and annoying, but we can see why it happened. Neither company wanted to abandon the brand name of the original company, so each entity kept calling itself Circle Line, confusion be damned.

Between the two companies, there are too many cruise options to list them all out and explain what each entails. However, both Circle Lines do the same fundamental thing, which is showing people the sights of New York City from the perspective of the city’s bay. Of course, the sights both companies show off are largely the same, although of the two companies, Circle Line Sightseeing, as its name implies, seems more committed to sightseeing as an end in itself. Circle Line Downtown, probably because it is owned by a water taxi company, plays a role that is slightly more practical (in that some of their cruises can serve as simple transportation). For this reason, the tickets sold by Circle Line Sightseeing are all for self-contained tours of the city that start and end at the same spot, whereas Circle Line Downtown, while certainly offering self-contained tours, also offers an all-day pass, which allows people to use Circle Line Downtown more like a day pass for a city’s public transportation system (you can get off and on, use the service as much or as little as you please, and so on).

To conclude, although there are some differences between the Circle Line companies, both offer very similar services. Many people will no doubt pick one company over the other because it suits their needs more, but we suspect that more random forces often direct people to the ticket they buy, and this is just as well given their similarities. Moreover, both companies have been successful at attracting positive reviews, so you’ll probably be happy with either if you want to see New York City from the water.