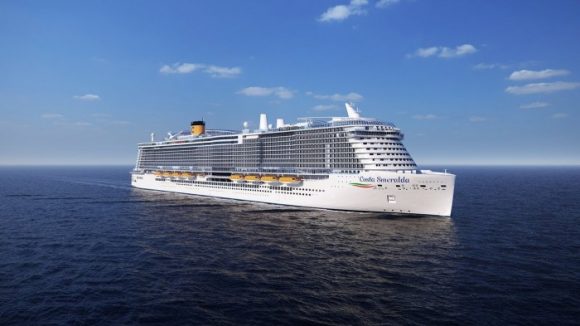 On December 5th, Costa Cruises acquired Smeralda, their newest ship that happens to be powered by liquefied natural gas. The Italian company now has fifteen ships in their fleet, with Smeralda being their largest ship thus far, coming in at 183,900 tons. It fits up to 6554 passengers, as well as 1646 crew members. It was built specifically for the cruise line, and is only the second cruise ship in the world to be completely powered by liquefied natural gas. The handover occurred in Turku, Finland, which was where the ship was built. It left Finland on December 6th to sail to Barcelona, Marseilles, and Savona for presentations.

The delivery of the ship is likely a moment of relief for Costa, as there were a good amount of delays before Smeralda was in the company’s hands. It was set to be completed by October, but was delayed until mid November due to technical difficulties in the actual construction of the vessel. These same difficulties lead to a postponement until late November, which was followed by a rescheduling to early December. Luckily, the technical challenges were overcome and the ship was finally completed, making Costa only the second cruise line in the world to have a ship powered by liquefied natural gas.

This is particularly important to the company, as they have been believers in this energy source for quite some time. Neil Palomba, the President of Costa, was quoted about the ship, stating that it “will be a further boost to the use of LNG [liquefied natural gas] in cruise ships, a technology we were the first to believe in, setting a new course in the cruise sector.” Smeralda is the first “of five new LNG ships” that Costa plans to build, which they hope will help them reduce their environmental impact and contribute to a more sustainable tourism industry. Palomba also said that Smeralda doesn’t sacrifice safety or anything else for its environmental friendliness, ensuring that it still offers “Italian hospitality [… that will be] able to enchant and excite not only new cruise passengers but also more experienced ones.”

The cruise ship industry is not one that is generally known for its eco-friendly nature (must we look much further than an infamous Vox article that declared that cruises are bad for the environment and not safe?), so it is heartening to see well-known companies like Costa advocating for changes that will have positive impacts. Liquefied natural gas is non-toxic and much better for the environment than any other fossil fuel burnings. It is said to “improve local air quality and public health as well as reduce carbon dioxide (CO2) emissions.” It emits half the CO2 that coal does, and emits almost no other harmful chemicals like mercury or sulfur dioxide (especially when compared to other fuels). Using LNG on one of their ships, and eventually on five, is a big step towards lowering Costa’s footprint, and we hope that other cruise lines can follow soon.