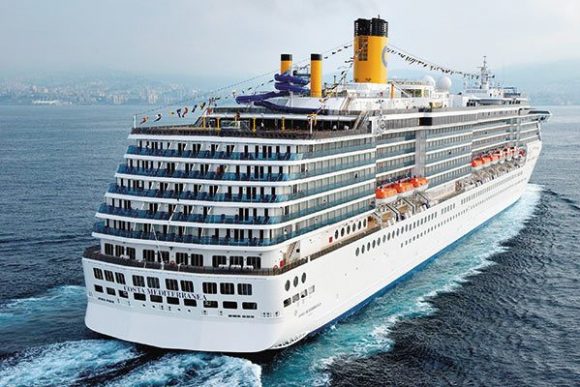 If you know much about cruises, chances are you’ve at least come across Costa Cruises. If you’ve never booked a trip with the company, you may know them for Smeralda, their absolutely massive ship that is completely powered by liquefied natural gas (yay, sustainability!). The Italian cruise line has been around longer than you can really imagine (since 1854, actually), so let’s dive in and see what’s given this brand such staying power.

The Costa fleet is quite extensive, and is divided up into classes. The Classica class is only the neoRomantica, with a gross tonnage of around 56,000; next up is the Victoria class, occupied only by the aptly-named Victoria, which checks in at 75,000 tons. The next biggest is the Atlantica, another one-ship class with the Mediterranea, which is over 85,000 tons. The Luminosa class is comprised of Luminosa and Deliziosa, both of which are 92,700 tons. The next biggest is the Fortuna class at 102,000 tons, with Fortuna and Magica. The Concordia class has Serena, Pacifica, Favolosa, and Fascinosa, all of which are 114,000 tons. Diadema, 133,000 tons, is the only ship in the Diadema class. The same goes for the Venezia in the Venezia class. It’s a bit bigger than Diadema, at 135,000 tons. Finally, the excellence class has the current fifth biggest ship in the world: Smeralda, at 185,000 tons. That’s a big one! As you can see, there’s a load of different options to pick from, and you can go small or mega, depending on your preferences.

One of the most popular European lines, you can hop on a Costa cruise for a pretty low price. There are a ton of options ranging from a few hundred bucks (in USD) to $1000; after this, there are still plenty of itineraries to choose from. The price is largely kept down by the fact that it really only covers your room and meals in some of the restaurants (not all). Anything extra is not included and is gonna cost you.

A lot of the activities on Costa ships are family-oriented. You can check out a version of TV’s The Voice talent show, watch a 4D movie, or send your kids to hang with Peppa Pig. This doesn’t mean there’s nothing for the adults, though. There are massages, saunas and casinos, among other things. The food has variety, but you’ll have to pay extra to get into certain restaurants. On the Diadema, for instance, there are three free restaurants and five pay spots. The food has good reviews, though not completely glowing.

Costa has a reputation similar to America’s Royal Caribbean. The ships are big and crowded, and have a bit of an excited, party atmosphere. The user reviews are all over the place, demonstrating that this cruise line is not for everyone. It’s also often noted that Costa is very European culturally, and has some standards that may befuddle American tourists (think paying for drinking water).

With all of this said, Costa is one of the cheapest ways to get a trip on the ocean from Europe. While it’s not the experience that everyone is looking for, it can be excellent for families looking for a quick getaway that won’t hurt their wallet too much.

← Three of the Wildest, Most Fun Activities You Can Do on Cruises
The Best Sunscreens for Cruise Travel →