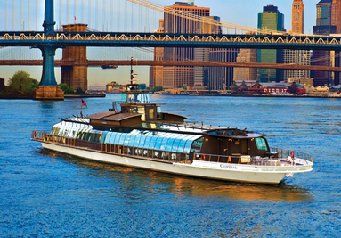 New York City, being a massive city that is in some ways built around water, has a number of different dining cruises – probably more than any other place in the United States, in fact. There are five major companies that offer dining cruises in NYC, and they offer them with regularity. Thus, on most days in New York, there are a number of different places to eat brunch, lunch, or dinner on a boat. Below we have compiled a concise guide to the dining cruises of New York City, listing the companies that offer them and what to expect on board.

There are, as mentioned, five different companies that offer dining cruises in New York City: Spirit Cruises, Bateaux New York, Hornblower, World Yacht, and Skyline Princess Cruises. (There are a few other companies that have ships for rent, which could be used for dining cruises, or offer things like “booze cruises,” which might have some small food element, but these five appear to be the only ones that regularly offer dining cruises with full meals.) Spirit and Bateaux are owned by the same company, Entertainment Cruises, and thus when you search their websites for cruises, you get results from both companies. However, the two companies’ offerings are actually fairly distinct, with one notable feature being the style of meals served on board each ship. Bateaux has plated meals, and Spirit serves their food as a buffet. Although it could vary for certain events, plated meals are the more common style of dining on cruises, and it appears that Spirit is the only company that offers a buffet.

The two main types of dining cruises are brunch cruises and dinner cruises, but there are lunch cruises on occasion. The difference between lunch and brunch cruises often isn’t very meaningful, though, at least not in terms of when they are offered, which tends to be at about noon, and then they’ll conclude a couple of hours later. Dinner cruises, being grander (and more expensive) affairs, generally last around three hours and often involve after-dinner entertainment, like a DJ or a live band.

The prices vary to an extent, but dinner cruises generally cost at least $100 per person, and sometimes the price is significantly more. Lunch and Brunch cruises are about half as much as whatever the dinner cruise costs. For example, Bateaux appears to have the most expensive cruises, at least in general, with their dinner cruises costing almost $150, and thus their brunch cruises are more expensive because they cost roughly half of this. The figures we are citing are of course normal prices, and thus don’t include any promotions you might come across. For instance, World Yacht is currently offering a buy-one-get-one-free deal for dinner cruises, and so at the moment this company is offering particularly cheap cruises. The prices we list are also associated with the regularly scheduled dining cruises, not the one’s held for holidays, like Valentine’s Day, which might cost slightly more.

As you can see, the dining cruise options in NYC are extensive. There is essentially always something available, and on a lot of days you’ll have a range of different options to choose from. If you want to reserve one of these cruises, all of the five companies listed above have online booking systems, so it’s easy and quick. Before deciding on anything, though, we recommend looking at each company to see if they have any promotions going on because you can save a substantial amount of money this way.

Article Name
Dining Cruises in New York City: A Guide
Description
There are five major companies that offer dining cruises in NYC, and they offer them with regularity.
Author
All About Cruises and More
Comments: 0 Posted by: Cruiser Evan Categories: Theme Cruises