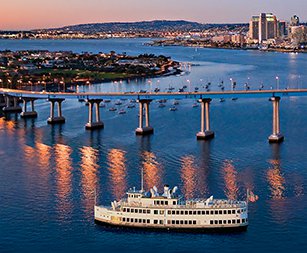 Thanks to two major providers, Flagship Cruises and Hornblower Cruises, dining cruises in San Diego abound. Both of these companies offer regularly scheduled brunch, lunch, and dinner cruises, and they also offer a number of specialty cruises. The specialty dining cruises are generally offered on a holiday, although both companies have created their own cruises that are distinct from their regular and holiday offerings. In addition to these major providers of dining cruises, there are also yacht chartering companies, which will allow you to book a ship to host your own private dining cruise. Below we explore these various options in more depth, providing you with one convenient guide to dining cruises in San Diego.

The companies distinguish themselves a bit through their specialty cruises, although there are parallels between the two companies’ offerings in this area as well. For example, each company has a brunch cruise featuring champagne on Sundays – it’s the “Sunday Champagne Brunch Cruise” for Hornblower, and the “Champagne Sunday Brunch Cruise” for Flagship – and the features of these two cruises are almost identical. They both last from 11:00 AM to 1:00 PM, feature meals served buffet style, and cost around $60. However, they also have offerings that are specific to each company. Flagship has their “Sunday Prime Rib Dinner Cruise,” for example, and Hornblower has “Lobster Dinner Cruises” on Fridays and Saturday. And although the companies each commemorate the same holidays, their offerings are different. Flagship offers just one brunch cruise for Easter, whereas Hornblower offers a couple of different brunch cruises and a dinner cruise. Finally, each company has their own specialty cruises, like Hornblower’s “Full Moon Dinner Cruise” and Flagship’s “Scenic Lunch Cruise.”

Between the two companies, there are a quite a few dining cruise options, even if there is some (largely unavoidable) overlap. If you want to know the details of any given cruise, you should visit the Flagship website and the Hornblower website. Before wrapping everything, we should briefly mention, as we did above, that chartering a boat is also a possibility if you want to a take a private dining cruise. In fact, both Flagship and Hornblower offer their ships for private charter, but there are also other companies with smaller ships that do the same. Voyager Yacht Charters, for example, can only accommodate groups of six or fewer people, and you can enlist their services for a pre-established package that features a meal, or just rent the ship by the hour and arrange your own meal.

In light of all these options, you should probably be able to find a dining cruise option in San Diego in line with what you are looking for.