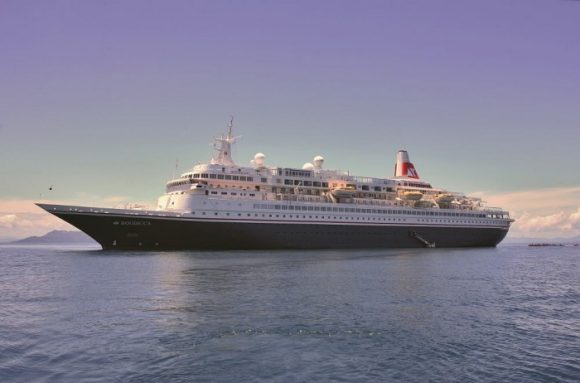 Fred. Olsen: Out with Boudicca and Black Watch, In with Bolette and Borealis!

It seems that regulars to the Fred. Olsen cruise line should get ready for some major changes to their fleet. It was announced just a bit ago that they would be receiving two new ships that they purchased from Holland America, and they will be retiring two older ships to make room for these vessels. Let’s check out which ships are on their way out, as well as the ships that will be replacing them.

Because there are two ships coming in, two ships have to go out. These two are the Boudicca and the Black Watch. These ships were, in terms of modern cruising, pretty old, as they were both built in 1972. The Black Watch was the ship that had been in Fred. Olsen’s fleet the longest, as it had been sailing with them since 1996, giving it a 24-year career with the company. Boudicca, on the other hand, had a shorter career, starting in 2005 and lasting 15 years. Both were far smaller than the ships that are replacing them, clocking in at around 28,000 tons whereas the new ships are both over 60,000 tons. It isn’t clear whether Fred. Olsen is planning to sell these ships or simply scrap them, but it’s likely that it would be relatively hard to find a buyer for old, small ships. Guests who were booked on either of these two ships will have their bookings transferred to one of the two new ships.

The two new ships that will be replacing the Boudicca and the Black Watch will be the Bolette (formerly known as the Holland America Rotterdam) and the Borealis (formerly known as the Holland America Amsterdam). Neither of them are brand new ships, but they are younger than most of Fred. Olsen’s fleet, with the Borealis being built in 1997 and the Bolette being built in 2000. They will definitely be giving Fred. Olsen a more modern feel, and they will also be the largest ships in their fleet by far. When the cruise line accepts the vessels, their fleet will be five-strong, including one river ship.

TThe two cruise ships that are leaving the Fred. Olsen fleet both have very long histories with the cruise line, so it makes sense that saying goodbye will be a bittersweet moment for both Fred. Olsen and their guests. With this in mind, Fred. Olsen will be hosting a virtual farewell ceremony on their online cruise hub.

If you have any thoughts or pictures you’d like to share, head over to The Bridge and celebrate the careers of the Black Watch and the Boudicca!

Article Name
Fred. Olsen: Out with Boudicca and Black Watch, In with Bolette and Borealis!
Description
It seems that regulars to the Fred. Olsen cruise line should get ready for some major changes to their fleet.
Author
Ben Mangelsdorf
Comments: 0 Posted by: Ben Mangelsdorf Categories: Cruise Lines, Cruise News, Fred. Olson