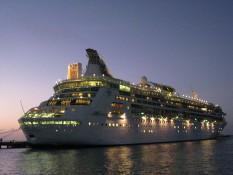 Grandeur of the Seas, the Royal Caribbean Ship Possibly Plagued by Norovirus, is Back at Sea

Being trapped in a confined space surrounded by people who are visibly, audibly, and at times olfactibly sick with a highly contagious gastrointestinal illness is a miserable experience. It is this experience that Royal Caribbean passengers over the last two weeks called their cruise vacation. For two weeks in a row, Grandeur of the Seas passengers were stuck on a vessel plagued by what could potentially be norovirus, an infection that causes constant vomiting and diarrhea. The virus also spreads quickly, especially in an environment in which there are high levels of human-to-human contact (like on a cruise ship). Despite the two illness-riddled voyages, Grandeur of the Seas set sail on Saturday to the Bahamas for another seven-day cruise, right on schedule. No reports have yet surfaced about a third outbreak aboard the ship.

To be sure, a relatively small percentage of passengers and crew members – a little over 100 out of the 3,000 people aboard the Grandeur of the Seas – were afflicted with illness on each of the ship’s last two outings. However, those who were ill were miserably ill, suffering from near-constant stomach pain as the ship sailed its course. Moreover, the other passengers aboard the vessel lived in fear of catching the virus that all but crippled, at least during the depths of the ailment, their fellow passengers. It is hard to relax on the deck of the “newly revitalized” Grandeur of the Seas when implacable vomiting and diarrhea could be right around the corner.

To help protect the new round of passengers who boarded the ship on Saturday, Grandeur of the Seas was thoroughly cleaned and sanitized before it set sail. An epidemiologist and two environmental health officers from the Center of Disease Control were also on board the ship on Saturday to investigate the vessel and collect specimens for testing. During the cleaning and inspection, the ship was docked in Baltimore, which is the cruise port from which it sails all year round.

Passengers who felt uncomfortable about sailing on a ship that had twice been plagued with illness in the last two weeks could reschedule their trip. However, given the complexity of taking a cruise vacation, which involves not only taking time off from work but also getting to the port of departure, this was not a realistic possibility for many passengers. Instead, they had to roll the dice and board the ship – buy the ticket, take the ride – placing their trust in Royal Caribbean’s sanitation practices and whatever other powers they call on in times of uncertainty.

Article Name
Grandeur of the Seas, the Royal Caribbean Ship Possibly Plagued by Norovirus, is Back at Sea
Description
For two weeks in a row, Grandeur of the Seas passengers were stuck on a vessel plagued by what could be norovirus. The ship has just set sail again.
Author
All About Cruises and More
Comments: 0 Posted by: Cruiser Evan Categories: Cruise News

← Booze Cruises
The Port of City of Mobile, Alabama: Things to See and Do Before Leaving on a Cruise →