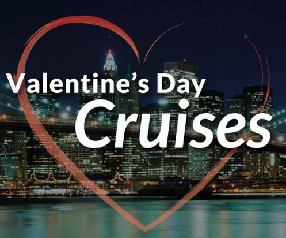 In total, Hornblower operates out of nine different cities, and as we saw above, their Valentine’s Day cruises are offered at six of these locations. They would presumably offer the same cruises at Corpus Christi, Sacramento, and Long beach if they had the resources, but evidently they do not. In Sacramento, for instance, they only offer one-hour river cruises on a fairly small vessel, and this isn’t the type of ship that is equipped to handle the elaborate Valentine’s Day celebrations that they host on their vessels stationed in other ports. So, Hornblower offers Valentine’s Day cruises in a lot of places, but not in every city they operate in.

We have written about Hornblower Valentine’s Day cruises in articles about New York, San Diego, and San Francisco, and while there are slight variations between the offerings in each city, they are all quite similar. (For the record, San Francisco and Berkeley are to an extent treated as one location by Hornblower, at least when it comes to Valentine’s Day cruises. Ships from San Francisco and Berkeley sail from different ports, and there is a separate page for Berkeley’s two Valentine’s dinner cruises, but listings from both cities are organized together under the San Francisco section of the Hornblower website.) Each city (except for Berkeley) has at least one Valentine’s dinner and one Valentine’s brunch cruise, and these two cruises remain essentially the same, at least in basic outline, no matter where you are sailing. The main difference between the cities’ offerings lies in the number and variety of cruises. In San Francisco, for example, cruises last from Friday the 13th to Sunday the 15th, and there are also seated and buffet-style dinners. In New York, there are only two cruises, a brunch and a dinner cruise, and they are both on the 14th.