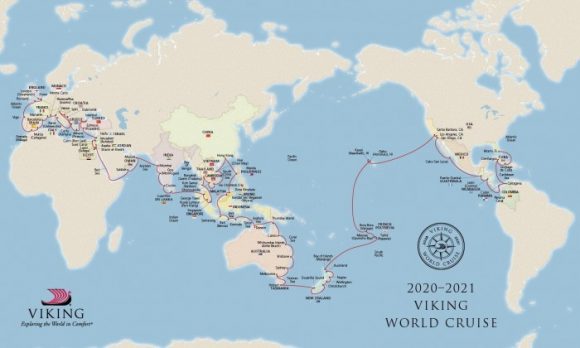 One of the most exciting itineraries that you can go on is a world cruise. That’s pretty much a given. If you have the money and the time to go on one, there’s almost no better way to travel. You see so many exotic and exciting locations on the earth that you normally would never get a glimpse of. The Viking world cruise that will be departing in 2021 isn’t for everyone (for a multitude of reasons), but we can all look at it and get a surge of wanderlust. Let’s inspire your future vacations by taking a peek!

While we will definitely take a look at a few of the highlights of this world cruise, let’s take a broader look at it first. This is a cruise that will take you on a 161-day trip from Miami to London. Along the way, you’ll visit a place or two. And by that mean we mean you’ll get to see 33 different countries across 6 continents. You’ll see 75 different cities and get guided along 73 different tours. You’ll spend many days travelling at sea, but you’ll spend just as many exploring the amazing locations that are along the itinerary.

There are so many different amazing places along the route of this cruise that it’s hard to pick just a few to look at. We’ll go over some of the coolest locations that this cruise offers. But be warned, this barely scratches the surface of it!

While you won’t get to spend too much time in Egypt, it will undoubtedly be one of the locations with the sights that stick the most in your mind. You’ll explore the city of Luxor and get to admire the mighty Nile River from its banks before jumping over to a lesser-visited Egyptian spot: Sharm el-Sheikh. This spot is known for having an impressive contrast between its beaches, oceans, and deserts, all of which combine to give an authentic Egyptian beauty.

You’ll spend a few days in Indonesia. It’s one of the countries that often tops people’s dream travel lists, so make sure to enjoy it. One of the coolest Indonesian stops is Komodo Island, which sounds a lot like what it is: an island full of Komodo dragons. While in Indonesia, you’ll see just as many beaches as you will ancient temples.

New Zealand is one of the places that you’ll spend the most time in, with multiple days dedicated to the location. You’ll go to the Bay of Islands, Auckland (for three days), Napier, Wellington, and more. These will be chill days to explore some of the coolest cities the nation has to offer.

If you’re interested in checking the world cruise out in detail, you can click here. Mind that booking price, though.