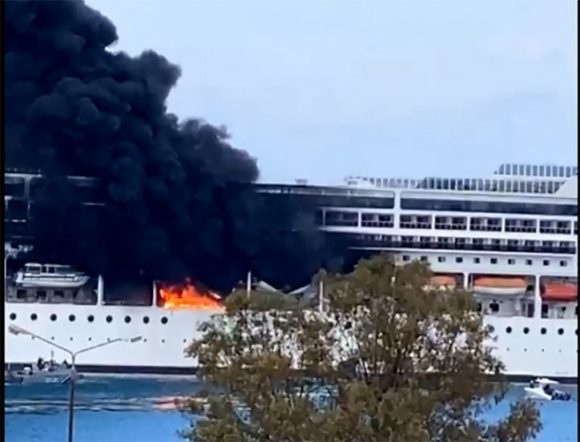 Some bad news from MSC: one of their ships was seen smoking and on fire on March 12th. MSC Lirica was docked in Greece when onlookers noticed black smoke coming from the vessel in the afternoon. Flames were also visible. Here are all the details on the event that we currently know.

According to MSC, the fire was reported to the MSC support center in London at 3:42 PM from Corfu, Greece. The fire didn’t start in the ship itself but rather in one of the lifeboats that was inside the ship. The fire ended up burning for an hour before they were able to get it under control, and the smoke made the situation look quite serious. Lirica, which is one of the main ships in the Lirica class that belongs to both MSC and AIDA, has had a relatively uneventful career up until this point.

While the ship wasn’t currently accepting guests at the time of the fire, there were crew members present on the ship working on keeping it in good shape. Many were naturally worried that there were going to be injuries from the fire. Additionally, a fire of this size made many concerned that the ship itself would sustain damage. MSC released a statement later in the day on March 12th, however, that made it clear that the fire created minimal damage. None of the 51 crew members experienced any injuries, and the emergency services members were also completely safe while fighting the fire. The damage to the ship was also not as extensive as many had feared. MSC said that there was “no damage to the inside of the ship but only to her side due to the flames and the dense black smoke.” Pictures show a very blackened and charred ship, but there doesn’t appear to be any structural damage.

The cause is the one thing that we aren’t exactly clear on at the moment. The fiberglass lifeboats on the side of the ship are being cited as creating the fire, but MSC currently doesn’t know why the lifeboats caught fire in the first place. They have started an investigation, the results of which are still pending. Lirica and its sister ships have been sailing safely for years, however, so we would imagine that this is a one-off incident rather than one that is likely to reoccur.

It’s great to hear that no one was injured in this fire. Those pictures are pretty scary! We’re glad that MSC and local services were able to get this under control before it got any worse.