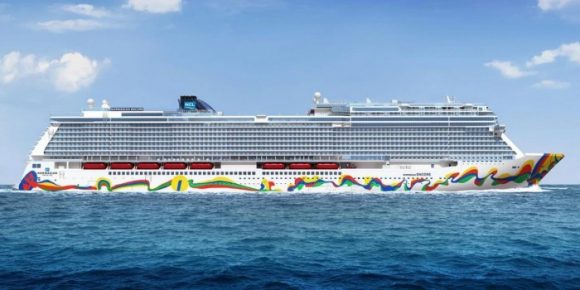 Here’s some great news for anyone looking to take a trip on Norwegian’s brand new ship, the Encore: the cruise line is planning to give away a ton of free trips. For those who don’t know much about the Encore, it’s set to sail from Miami to the Eastern Caribbean and from New York to Bermuda, with trips lasting up to a week long. A sneak-peek event in New York left critics mostly pleased, citing crazy activities, excellent dining and a new commitment to sustainability via going plastic free. The Encore will also be offering a ton of other experiences and amenities. The Broadway show Kinky Boots will be performed every night, there are 12 bars and lounges to choose from, and there are rooms with private balconies and “luxury showers.” On top of all of this, the Encore isn’t too expensive, with a lot of the the trips being in the $500 to $700 range.

Of course, cheap is good, but free is best! Norwegian was already giving out free tickets to the Encore about two months ago, and it seems they plan to keep going with this initiative. The tickets back in September went to nominated people who were deemed as heroes, with one ticket going to one person from each American state and territory, as well as one for each Canadian province. These new tickets are up for grabs for anybody, provided you’re quick enough. 100 free cruises were given away on November 11th to participants in a New York Scavenger hunt. The players would follow clues to find golden ships that could be redeemed for free cruises, solidifying Norwegian as the Willy Wonka of the sea. Over 1000 people registered for the hunt, but still, those odds aren’t bad for a free cruise (and hey, the scavenger hunt was probably fun on its own).

In case you’re reading this and feeling left out, don’t fret! Norwegian plans to do a similar event in Miami on November 20th, so keep your eyes peeled. There aren’t a ton of details announced yet for it, but we expect that it will likely follow a similar format and also function as a celebratory event for the Encore’s first few days at sea. Once Norwegian gives out some more info, we’ll be sure to have it here so that those looking to get their free cruise fix can have their chance.