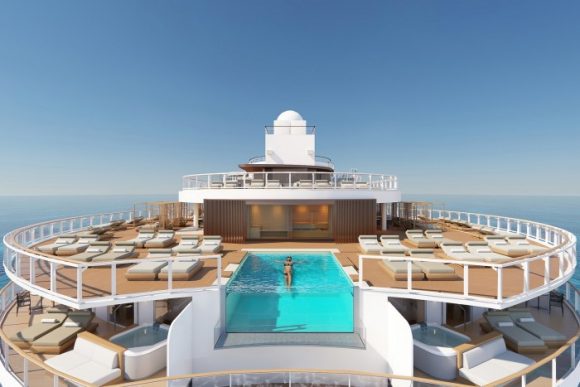 Norwegian Cruise Line has revealed their newest ship, Norwegian Prima. The cruise line has been relatively quiet during the pandemic, but that doesn’t mean that they haven’t been working on new projects behind the scenes. Prima is the first ship in Norwegian’s new Prima class, and it promises to bring a new kind of cruising experience to the brand’s fleet. Here are all the details about Norwegian Prima that we have so far.

According to Norwegian, Prima represents an “exemplary representation” of their “brand evolution.” They have been wanting to break into the premium cruise world for a bit now, and Prima does exactly that. The philosophy of the ship is to offer the comfort and fun of a typical Norwegian ship while also featuring a larger emphasis on luxury. A statement from the company said that Prima will have “more wide-open spaces, thoughtful art and design and world-class service.” Norwegian is calling Prima “the most spacious new cruise ship at sea,” and the ability to enjoy expansive spaces seems to be one of the major calling cards of the ship.

Prima is one of the biggest ships in Norwegian’s fleet at 142,500 tons, though it will likely feel even bigger thanks to the focus on open spaces. It is 965 feet long and has a max occupancy of 3215 guests. There will be 13 different classes of cabins available, and the rooms will also feature the ship’s take on open space. In fact, a few cabin classes will have the biggest bedrooms, bathrooms, and showers in Norwegian history.

The way that you spend your time has been revolutionized on Prima. The main draw will be the ability to fully enjoy the beauty of the ocean on the large decks, but there are plenty of other new activities to check out. The Concourse is a unique attraction that fits in well with Prima’s theme. It is an outdoor sculpture garden featuring the work of abstract artist Alexander Krivosheiw. The ship also features two glass bridges called Oceanwalks which let guests walk directly above the water. In terms of food, the biggest innovation is the Indulge Food Hall, an outdoor open-air collection of restaurants. There will be 11 restaurants in the Food Hall, as well as three other stand-alone restaurants.

Prima is set to debut in August 2022 with a series of European itineraries. The response to the ship has been emphatic since it was revealed on May 12th, and cabins are quickly selling out. You can check out the different voyages over here!