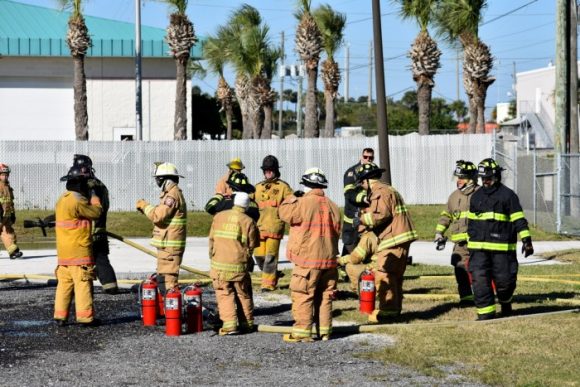 We are quickly approaching the new generation of ships: those powered with liquefied natural gas (or LNG, if you’re of an acronymish-mind). We’ve reported on them before with the announcement of Costa’s acquisition of Smeralda, and it seems the industry is preparing for a whole new wave of ships of this kind. Smeralda is old news at this point, so Canaveral is all about Carnival’s Mardi Gras, which will be the first LNG-powered ship to call North America its home.

The first step in getting Port Canaveral ready is training the firefighters for a whole new kind of fire that can occur. This is already beginning. The Port Canaveral Maritime Firefighting Academy held a three day long class on fighting fires caused by liquefied natural gas. The education included formal learning in classrooms as well as hands-on exercises to really teach them how to deal with this threat. The Academy had been preparing for this for quite some time now, knowing that this change was coming. The port director and CEO John Murray was quoted as saying that “enhancing the core capabilities of our first responders is an investment in ensuring the safety and security of our Port.” Makes sense to us!

This specialized training is quite important, especially when considering how unique LNG really is. Mardi Gras plans to refuel using something called the Q-LNG 4000, a ship that is designed merely to transport LNG from Georgia to Port Canaveral. The Mardi Gras will then refuel whenever it is back at its port. In addition to trained firefighters, The Canaveral Port Authority is planning on getting a boat that is designed solely for firefighting and rescue for Port Canaveral, as well as nearby areas.

Despite Smeralda using it for a bit now, LNG is still quite new. While all this talk of fires and disaster may seem a bit dreary, let’s not forget all the good that LNG can bring. It drastically lowers the carbon footprint of ships, is non-toxic and hardly emits any bad chemicals in comparison to other common cruise fuels such as coal. It’s actually pretty exciting to see such a major port take it seriously and install infrastructure that will allow a new fuel type like this to really flourish. Hopefully this will set a precedent for other cruise lines that the industry is moving in a more eco-friendly direction, as well as showing that it isn’t too difficult from a logistic or safety perspective. The training is already mapped out, people!

We are expecting Mardi Gras in November of this year, so keep an eye out. And, in case you forget, it’s the cruise ship with a roller coaster on-board.