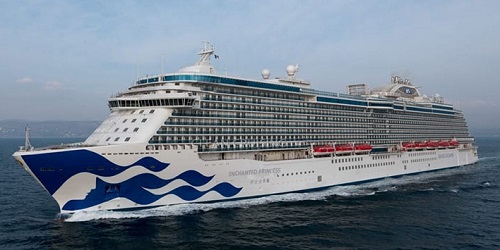 Enchanted Princess, the newest ship for Princess Cruises, has officially been delivered. It went through a relatively long construction process which was lengthened due to coronavirus. Months after completing its safety trials, Fincantieri has finished up working on the ship and transferred it over to Princess. Let’s check out all the details of the ship, as well as what we can expect for its future.

Despite not yet having sailed commercially, Enchanted Princess already has a long history. It began back in 2016 when it was first ordered by Princess as part of a series of new ships they were looking to get. Set to join the Royal class of Princess ships, Enchanted Princess would take a while to be built (its gross tonnage is 145,000 tons). Still, a maiden voyage on July 1st, 2020 was expected. The coronavirus pandemic caused multiple delays during construction, continually pushing back its debut date. It has only now been delivered, about three months after its projected maiden voyage.

When Enchanted Princess passed from Fincantieri over to Princess, it was a moment to celebrate. A virtual ceremony was held that was attended by many important people from Carnival Corporation, Princess’ owner. Jan Swartz, the president of Princess, gave some statements at the event, saying, “The first few months onboard of the Enchanted Princess will be quite different from the usual activity of getting the new ship underway.” She is, of course, referring to the changes in operations that the pandemic has brought to the cruise industry. After speeches from multiple corporation officials were given, a flag changing ceremony happened to symbolize the changing ownership from Fincantieri over to Princess.

The future of Enchanted Princess

Sadly, this delivery does not mean that this ship will be sailing tomorrow – or even any time soon. While it was originally planned that Enchanted Princess would be sailing in November 2020, it is now unlikely to arrive in North America before December 2020. Once she is here, assuming that sailing is allowed in the U.S., travelers can expect Enchanted Princess to run itineraries from Florida to both Europe and the Caribbean until April 2021. After that, there are a series of Mediterranean itineraries throughout the summer of 2021 planned for her.
This is all subject to change pending the status of the pandemic, however.

It may have happened a bit later than most were expecting, but Enchanted Princess is now one step closer to sailing, which is great news. The delivery of the ship also marks the 100th ship built by Fincantieri, which is certainly a landmark worth celebrating!

← The Current State of the CDC No Sail Order: Overruled by the White House, Extended to Halloween
Take a Look at Virgin Voyages’ Ship, Scarlet Lady →