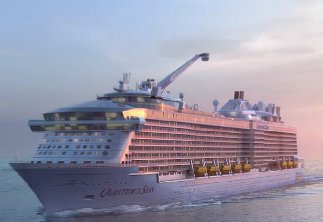 Quantum of the Seas: A Concise Guide to Royal Caribbean’s Newest Cruise Ship

Although Quantum of the Seas has some new and interesting attractions, it is the environmentally conscious design of the ship that sets it apart. Indeed, Quantum of the Seas may set a new standard for the cruise industry, which isn’t exactly known as a force for good in conservationist circles. Considering that cruise ships produce three times as much carbon as airplanes per mile traveled, fuel efficiency was the principle concern driving Quantum of the Seas’ design. Apart from being powered by two diesel electric engines, the Quantum of the Seas employs jets below the waterline to pump out bubbles. These bubbles essentially coat the bottom of the ship, allowing it to glide through the water with greater efficiency. The jets are covered so that fish can’t be sucked into the ship and then introduced as an invasive species into a foreign port’s ecosystem.

Increasing fuel efficiency is perhaps the ship’s most environmentally impactful design element, but there are many other features. For example, the waste from the ship’s 18 restaurants and bars all goes to a central recycling center, and any non-recyclable materials are burned into an ash that is stored and can later be used to surface roads. To decrease the amount of water stored on board, the ship also has a desalinization system to convert sea water into drinking water. A good overview of the ship’s environmental features, including ones we have not mentioned, can be found in The Atlantic.

No matter how environmentally friendly a ship may be, it still needs to draw in passengers, and for this the Quantum of the Seas is decked out with a wide variety of attractions. Some of these are fairly standard – like the ship’s climbing walls and basketball court – but others are unique to Quantum. The ship has a skydiving simulator on board, the first on any cruise ship, and the vessel also has a glass capsule attached to a crane-like apparatus called the North Star. People stand in the capsule as the crane maneuvers them 300 feet above sea level. Like any cruise ship that holds over 4,000 passengers, the Quantum of the Seas has many other features, but these are some of the highlights.