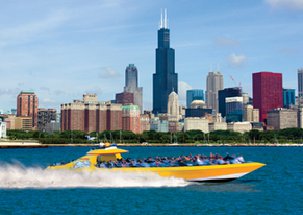 Seadog is a company that operates speedboat tours in Baltimore and Chicago. There are four Seadog speedboats in Chicago, and two in Baltimore. Most of these boats are used for tours of the cities in one form or another, but in Chicago there is one speedboat that is dedicated to “Extreme Thrill Rides,” which are basically just high-speed cruises around Lake Michigan. Below we outline what Seadog offers in both Baltimore and Chicago, as well provide some details about the Seadog speedboats themselves.

Somewhat strangely, Seadog is owned by Entertainment Cruises, which is the owner of dining cruise companies like Spirit Cruises and Odyssey Cruises, as well as of yacht chartering companies, like Elite Private Yachts and Windridge Yacht Charters. Essentially, all the companies of Entertainment Cruises focus on offering relatively upscale dining experiences, either on a regularly scheduled brunch, lunch, or dinner cruise open to the public, or on a yacht chartered for a private event. So, Seadog is something of a black sheep in the Entertainment Cruises array of companies, but only in the sense that it offers something totally different than the others.

As we said above, Seadog operates six speedboats – four in Chicago and two in Baltimore. The four in Chicago are called the Seadog I, Seadog II, Seadog V, and Seadog VI. All of these boats are approximately the same size, holding either 110 or 125 people. The Seadog V, which is also called the “Seadog Extreme,” is the boat used for the so-called “thrill rides.” It is 30 percent faster than all the other ships in the Seadog fleet, and can go over 45 mph (72 kph or approximately 39 knots) on open water. The boats in Baltimore are called Seadog III and (inexplicably) Seadog VI. Why there are two boats called “Seadog VI” (i.e., “Seadog 6”) doesn’t make a lot of sense, especially considering that the Seadog IV (Seadog 4) was evidently skipped over in the naming process. Perhaps a Roman numeral mistake was made, with “I” being placed on the wrong side of the “V” in one instance? In any case, the boats in Baltimore are basically exactly like the boats in Chicago, and each of them has a capacity of 120 passengers.

Although all of the tours have some element of speed (you wouldn’t be riding on a comically large speedboat if this wasn’t the case), the main focus is one touring Baltimore or Chicago by water. For anywhere from 30 to 75 minutes (it depends on the cruise), you speed around the water – the Patapsco River in Baltimore, and Lake Michigan in Chicago – and enjoy the sights of the city. The tours are narrated, and thus you are given a brief account of the city’s history and architecture. In Baltimore, there is only one tour, the “Sightseeing Speedboat Tour,” and in Chicago there are two, the “Architectural Tour” and “Lakefront Speedboat Tour,” in addition to the “Extreme Thrill Ride.”

Details about all of these cruises can be found on the Seadog website, where you can also buy tickets in advance (they are in the $20 to $30 range). If you are interested in other cruise-related ideas for either city, check out articles on Spirit Cruises for Chicago and Baltimore, and on Odyssey Cruises, Mystic Blue and Elite Private Yachts for Chicago specifically.