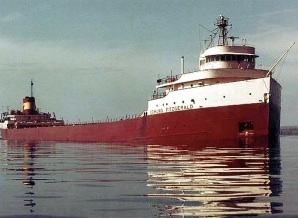 On November 10, 1975, the SS Edmund Fitzgerald sank in Lake Superior, taking the lives of all 29 crew members on board. Nearly 40 years later, it’s a tragedy that still stings. To help commemorate the lives of those who died in the Edmund Fitzgerald tragedy, there will be a memorial service this Sunday (November 10, 2013), 38 years to the day after the sinking occurred. The service will take place in River Rogue, Michigan, the small town where the ship was built between 1958 and 1959. The venue for the event is a heated tent near the Mariners Memorial Lighthouse at Belanger Park.

A number of people will speak at the event, including workers who helped build the ship and relatives of some of the crewmen who died in the accident. Artifacts related to the ship, as well as photographs and videos, will also be on display to visitors.

The official ceremony is two hours long, beginning at 6:00 PM and ending at 8:00 PM, although the heated tent will open at 4:30 PM for those who want to check out the display before the ceremony. A wreath will be tossed into the Detroit River at 7:10 PM, the precise time of the ship’s sinking, and a bell will be rung 29 times, once for each deceased crew member. Other parts of the ceremony include a plaque presentation and the lighting of a lamp. Free food and refreshments will be provided at the event.