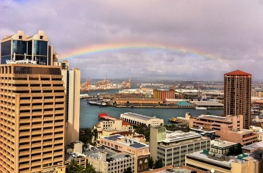 The Port City of Honolulu, Hawaii: Things to See and Do Before Leaving on a Cruise

Plenty of people think of Hawaii as a cruise destination, but few consider it as a cruise departure point. To an extent, this makes sense, as there aren’t too many cruises from Hawaii; however, Honolulu, Hawaii does have a port from which cruises sail, so you may find yourself at the Port of Honolulu waiting for your cruise to depart. And if you do find yourself waiting there, we’ve compiled some things to see and do before you leave on your cruise from Honolulu.

Compared to the major ports in Florida and California, the Port of Honolulu doesn’t get too much cruise ship action. However, four cruise lines do operate from the port: Celebrity, Royal Caribbean, Princess, and Norwegian. Each of these cruise lines operates two ships except Norwegian, which operates only one vessel. In truth, though, this makes Honolulu sound busier than it actually is, as only one vessel, Norwegian’s Pride of America, operates throughout the year. The other three cruise lines offer three cruises a year at most, all of which are repositioning cruises. So, only one ship truly operates out of Honolulu.

Honolulu is Hawaii’s capital and its most populous city. It known all over the world as a major tourist destination, so there are plenty of things to do as you wait before or after you return from your cruise. However, what you can accomplish will depend heavily on how much time you have. If you have several hours and a means of transportation, there are a few very popular war-related sights about eight or so miles from the Port of Honolulu. The most famous is the Pearl Harbor Monument (or the WW II Valor in the Pacific National Monument, as it is officially known). In addition to having all the standard educational resources of a national monument (a museum, a visitor center, guided tours, and so on), the Pearl Harbor Monument is home to the USS Arizona Memorial, which commemorates the ship that was sunk by the Japanese during the Pearl Harbor attack of WW II. About 1500 feet away from the USS Arizona Memorial is the USS Missouri, the ship on which Japan (technically the Empire of Japan) surrendered to the U.S. in 1945, thus ending WW II. So, for WW II history enthusiasts, some spare time in Honolulu will be thoroughly enjoyed. If you can’t make it this far from port but still want to see something military related, you could visit the National Memorial Cemetery of the Pacific, which is about two miles away and, if you’re up for it, is a fairly easy walk.

The WW II-related memorials are probably the most famous sights on Honolulu, but these alone don’t make it an international tourist destination – the beaches and warm weather are responsible for this. Hawaii’s beautiful weather can be enjoyed everywhere of course, and if you only have a couple of spare hours, you can simply walk around the area surrounding the port. There is shopping in the area, and Hawaii’s state library is only a few blocks away (in case you’re the type of person who has a natural inclination to see libraries, regardless of whether you can check anything out). The Hawaii State Art Museum is also in this area, as is the State Legislature. If you have children you need to keep occupied, there is a Children’s Discovery Center right near the port as well. So, you can actually see quite a bit in a relatively short walk around the port’s surrounding area. As for beaches, there unfortunately isn’t anything famous near the port, but the Ala Moana Beach Park is a couple miles away, and you could spend a leisurely hour or two there waiting for your cruise.

Of course, we have in no way exhaustively detailed all you can do in Honolulu. For one thing, we’ve largely neglected the island of Oahu’s natural beauty, which surrounds Honolulu on essentially all sides. However, these areas are difficult to get to if you don’t have much time before your cruise. If you have a spare day or two, though, by all means venture out of the city. The Diamond Head State Monument, with its volcanoes and hiking trails, is quite popular, as are the beaches at the Hanauma Bay Nature Preserve.

Regardless of what you do and how much time you have, Honolulu is a pretty great place to find yourself with time on your hands. There is a lot to do, and even if you do nothing at all, you can still enjoy Hawaii’s famously pleasant weather.

← Port Canaveral: Things to See and Do Before Leaving a Cruise
All-Inclusive Cruises: An Overview →