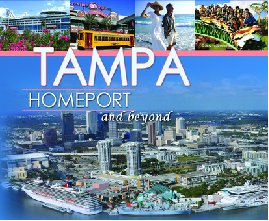 The Port City of Tampa: Things to See and Do Before Leaving on a Cruise

Despite being located in Florida, the main hub of the global cruise industry, Tampa, or more precisely Port Tampa Bay, is not particularly busy in terms of cruise traffic. This places it in stark contrast to other Florida ports, especially Miami, the busiest cruise port in the world. Even so, six ships from four different cruise lines sail from Tampa, and there are cruises all year long (albeit only from Carnival), so it’s obviously an active cruise port, and thousands of people pass through it each week. If you happen to be one of these people and you have some spare time before leaving on your cruise, we’ve outlined some things to see and do. With only a few hours free, you can get in a mini-vacation before your actual vacation by checking out what Tampa has to offer.

In considering what to recommend, we’ve operated on the assumption that you don’t have a surfeit of time, by which we mean an entire day or more. If you arrive in the city with more than a day to spare, you can essentially do whatever you want, and in fact you needn’t limit yourself to Tampa. You could, for instance, go to Orlando, home of Disney World and Universal Studies, which is only about an hour or so from Tampa along I-4, or you could go to any of the attractions outside of the city, like the Big Cat Rescue, the popular nature reserve north of the city. If you have less time, though – like, say, a few hours – you’ll have to stick to the area that is more or less around the port. We have therefore targeted sights and activities in this area. (Obviously, you might have an amount of free time between a few hours and more than a full day, and in which case you could stray fairly far from the port, but would probably want to at least stay in Tampa. If you find yourself in this position, you could consider going to a place like Busch Gardens, which is still in the city, but definitely more on the outskirts.)

Fortunately, Port Tampa Bay is right in the heart of the city. Of course, it is on the water’s edge, but it is tucked fairly far into the city thanks to the waterway that leads to the port, the Ybor Channel. So, you definitely aren’t overlooking the full Tampa Bay from the port. Indeed, you aren’t even really looking out over Hillburough Bay, one of the smaller bays that Tampa Bay turns into as you get closer to the shore line. Instead, you are right beside downtown Tampa, and thus are in an ideal position to simply check out the city a bit if you have some time to kill before your cruise departs. The port’s location enables idle exploration, so you don’t actually need an itinerary of sights to fill your spare time.

There are, however, some things worth checking out in the vicinity of the port. One of the easiest to get to is the Tampa Bay History Center, a large museum that is only about a half a mile south from the port. (Depending on where your ship precisely departs from, it could be even closer, as there is a terminal right by the building.) It is right along the shoreline and can be walked to easily. Right by the History Center is the American Victory Ship, a warship that also doubles as a maritime museum. The Florida Aquarium is right in this area as well, and this happens to be one of Tampa’s top attractions. And in addition to the museums and aquarium, there restaurants and bars in the area, along with some places to shop. Again, you are essentially in downtown Tampa at the port, so you won’t be in want of the comforts of civilization.

So, you can basically hang out at or very near the port and have plenty of things to do as you wait for your cruise. You’re in the heart of the city, and there are plenty of places to spend a few spare hours. Obviously, there is much more to Tampa then the small area surrounding the port, and if you have the time, check out as much as you can, but if you are confined to the port’s immediate vicinity, you’ll still have things to see and do.

Article Name
The Port City of Tampa: Things to See and Do Before Leaving on a Cruise
Description
With only a few hours free, you can get in a mini-vacation before your actual vacation by checking out what Tampa has to offer.
Author
All About Cruises and More
Comments: 0 Posted by: Cruiser Evan Categories: Cruise Ports