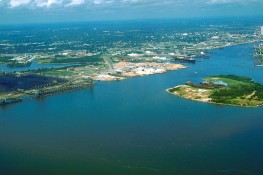 The Port of City of Mobile, Alabama: Things to See and Do Before Leaving on a Cruise

At present, there are no cruises being offered from Mobile, Alabama. The Port of Mobile is still an active port – it’s the only deep-water port in Alabama, so a lot of shipping activity still runs through it – but it is not currently an operational cruise port. However, cruises may resume from the Port of Mobile at any time – they were there once, and they very well may be there again soon – and we aren’t currently concerned with the cruises that leave from Mobile anyway. We are focused on what you can see and do in Mobile when you find yourself there. So, below we provide an overview of the things to see and do before leaving on a cruise from Mobile. When cruises start sailing out the Port of Mobile again, you’ll know exactly what to do.

Mobile is essentially a less-famous version of New Orleans. Both cities are former French colonies, and the French influence – in the cuisine, architecture, and religion – can still be felt in Mobile, just as it can be in New Orleans. In some ways, Mobile is actually the more significant historical city. It was the original capital of the French colony of Louisiana, and the Roman Catholic parish established there in 1702 was the first on the Gulf of the United States. Mardi Gras was actually celebrated in Mobile long before it was celebrated in New Orleans, beating the Crescent City to the party by over a half a century. So, if you are interested in New Orleans on historical grounds, you should also be interested in Mobile.

Some of Mobile’s attractions are related to its history. For instance, Mobile has a beautiful Roman Catholic church – the Cathedral of the Immaculate Conception – that was built in 1850. It is a widely admired and frequently visited cathedral in the Gulf States. At its consecration, Bishop Martin John Spalding declared it “almost worthy of God.” There is also a historical district of the city along Church Street where you can see several elaborate and well-preserved 19th-century houses. The cathedral and historical district are right next to each other in the heart of the city, perhaps a mile or so from the port. If these components of the city attract you and you want to know more about the city’s history, you might consider visiting the Museum of Mobile, which gives a nice overview of Mobile’s development and is right along the Tensaw River, slightly north of the port. Another notable sight right near the port is the USS Alabama, which is in Mobile’s Battleship Memorial Park. In addition to the battleship itself, which you can tour, there are 25 aircraft and a submarine on the grounds, so anyone interested in military history would enjoy a visit to the park.

So, now you know some things to see and do if you ever find yourself in Mobile, Alabama. In the immediate future, this won’t be for a cruise, but the cruise industry is constantly in flux. Disney Cruises just recently stopped operating from Galveston, Texas, and a few more cruise ships started operating out of Miami at the beginning of this year, for instance. This is the way the industry operates, and given that Mobile has the capacity to handle large cruise ships (the Carnival Triumph stopped there for repairs recently), we wouldn’t at all be surprised to see cruises start operating out of Mobile once again.

← Grandeur of the Seas, the Royal Caribbean Ship Possibly Plagued by Norovirus, is Back at Sea
South Korean Ship Filled with High School Students Sinks →