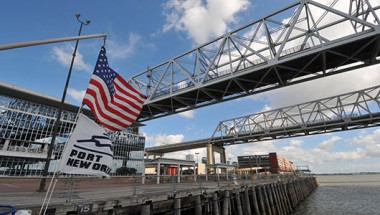 The Port of New Orleans (Port Nola or PortNO): Things to See and Do Before Leaving on a Cruise

In a recent article about what to see and do in Mobile, Alabama, we noted the similarities between Mobile and New Orleans, where Port Nolo (or PortNO) is located, and said that a trip to the former can be a lot like a trip to the latter. But you know what is even more like New Orleans? New Orleans itself, and there is no replacing a visit to the Crescent City, home of the New Orleans Saints, setting of The Confederacy of Dunces, and all around cool city. It is therefore an ideal place to spend some time before leaving on a cruise from the city (most likely to the Caribbean for obvious geographical reasons). If you build an extra day or two into your trip, here are some things to see and do in New Orleans before you set sail.

First, a couple of general things about New Orleans. As a former French colony that was settled nearly 300 years ago, traces of the Old World – in its architecture, cuisine, and so on – can be detected across New Orleans, making it a unique American city. Indeed, it feels a bit like a foreign country, something that is encouraged by the Louisiana state signs, which greet you – “Welcome to Louisiana” and “Bienvenue en Louisiane” – in both English and French. (The status of the French language in New Orleans, though, is overstated; indeed, to the intense disappointment of proud France, the status of the French language is overstated in general. More people speak Spanish and Vietnamese, to say nothing of English, as their mother tongue in New Orleans than French, which is the primary language of only about one percent of the population. So, New Orleans is far from a bilingual city. For good or ill, English reigns supreme.) New Orleans also has a thriving music scene (jazz was born in the city) and world-famous cuisine. So, if you are interested history, music, or food, or if you want to (mistakenly believe that you’ll be able to) practice your French, New Orleans is an excellent place to be.

The historical richness of New Orleans is something that lingers in the atmosphere – you’ll see it in the houses, churches, and other buildings around town, and you’ll taste it and hear it in any number of restaurants and bars. Thus, you don’t necessarily need a sightseeing agenda when you go to New Orleans – the city is an attraction unto itself. However, there are of course things to see in New Orleans, and in general it’s a major U.S. city, so you’ll find things to do even if you aren’t particularly “into New Orleans.”

Two highly regarded and heavily visited attractions in the city are The National WWII Museum and the Saenger Theatre. We mention these not only because they are very popular, but also because they are right in the heart of the city, near the Port of New Orleans. (The port is sometimes called “Port Nolo” or even just “PortNO,” and indeed it’s URL is portno.com, which is one letter off from what we presume is a more racy website, so type with care.) Both could be walked to from the port (especially the WWII Museum), so even if you only have a few hours to kill, one or the other could be visited (although it might not be worth visiting the theater if you can’t see a show, as you’ll only be able to see the outside). The museum will obviously appeal to people interested in military history, but it’s a very well-done, new museum, and it’s also housed in a beautiful building, so it has broader appeal. The Saenger Theatre is a historical site that was badly damaged by Hurricane Katrina, but it was recently restored to its original splendor. It’s a perfect place to go if you have a free night in the city. New Orleans also has a nice city park that is good place to kill some time, and there are a few famous streets and areas (Royal Street, Frenchmen Street, the French Quarter, etc.) that you might find worth checking out. The park and the various famous parts of the city are good places to go if you don’t want to pay any money for entrance fees or tickets.

Of course, we’ve hardly covered all you can do in New Orleans, but hopefully we’ve at least given you a taste of what you can see and do if you find yourself in the city before a cruise. It’s a big city with plenty of charms, so you should enjoy any time you have there.

Article Name
The Port City of New Orleans: Things to See and Do Before Leaving on a Cruise
Description
If you build an extra day or two into your trip, here are some things to see and do in New Orleans before you set sail on a cruise.
Author
All About Cruises and More
Comments: 0 Posted by: Cruiser Evan Categories: Cruise Ports