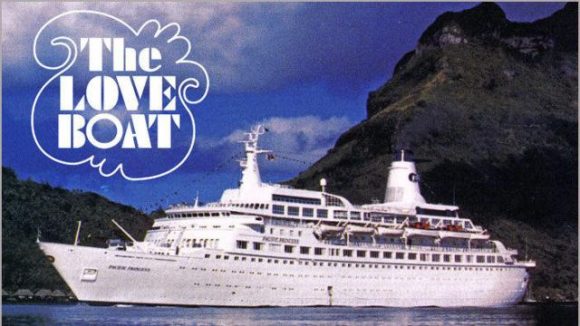 The Ships of the Love Boat and Where are They Now?

Whatever happened to the ships of the television show the Love Boat? We know what happened to the cast and crew, but what about the boats? Any fan of the show will remember the various ships where all the antics took place, but most viewers probably forgot all about them once the show went off the air. But, obviously, these ships didn’t just disappear into thin air. Let’s get up-to-date with them.

What was the Love Boat?

Here’s a little primer on the Love Boat for those not familiar. The Love Boat was a TV show that ran from 1977 to 1987 (a decade!). It balanced funny moments with drama and romance, and it all took place on a boat (as you might imagine). The star of the show was Captain Merrill Stubing played by Gavin MacLeod, an actor some may recognize from the Mary Tyler Moore Show. The cast rotated a bit over the course of the show, but the general premise remained the same across the ten years that it ran. It garnered quite a bit of popularity and is still watched to this day as it is syndicated across the globe.

Contrary to the literal title of the show, there were actually several different Love Boats that were used for filming. The pilot episode was on the Sun Princess, a vessel owned by Princess Cruises. After this, the show frequently used two other Princess ships, the Island Princess and the Pacific Princess. In fact, almost all of the filming took place on Princess ships, with the show using any of their ships that they needed. Princess even garnered a reputation as the Love Boat cruise line thanks to its connection to the show.

As we all know, ships often change hands. Some vessels can get sold and refurbished several times throughout their lifetimes, and that may be why it’s a bit hard to keep track of where the ships of the Love Boat are today. While many Princess ships were filmed on, it’s really the Sun Princess, the Island Princess and the Pacific Princess that were the biggest stars, and they’re the most relevant here.

The Sun Princess is no longer called the Sun Princess these days. Now, it’s the Ocean Dream, owned by Chinese line Runfeng Ocean Deluxe Cruises. Since the Love Boat, the Sun Princess had an interesting life, trading from Princess to Premier Cruises in 1988 and even being used in an episode of Columbo. Then it went to Disney, then CTC, then Festival, then Club Cruise. Finally, it ended up with Runfeng in 2012.

The Island Princess was with Princess until 1999 when it was sold to a South Korean group that used it for religious pilgrimages to North Korea. It eventually traded hands to CMV, where it was active for a while before moving around a few different companies once again. Finally, in 2015, the ship was taken made inactive, and demolished.

Pacific Princess was perhaps the most important ship for the Love Boat, as it was the vessel most prominently used. They kept it around until 2002, when it was sold to Pullmantur to become just the Pacific. Interestingly, it was seized by the Italian government in 2008 in response to unpaid repair bills. It went up for sale, but no buyers emerged, and it was eventually completely demolished in 2014.

What a sad note to end on! While one of TV’s most famous cruise ships is no longer around, we can thank it for the impact it had on the world. Many view the Love Boat – and, therefore, Pacific Princess and other Princess ships – as being responsible for a newfound excitement for cruising in America. Salute to those ships!

← Three Amazing Arctic Expedition Itineraries in 2020 and 2021
Will the Cruise Industry Bounce Back? UNWTO Offers Insight →