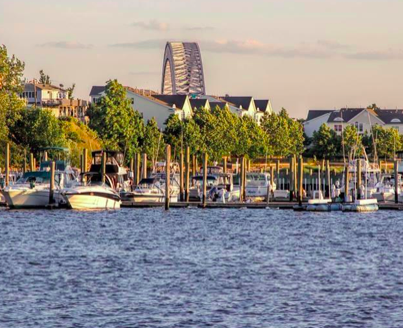 If people know of Bayonne, New Jersey at all, they probably know it as a port city. That’s how we know of it, and that is likely how other people who are interested in the cruise industry know of it as well. Three cruise ships sail from the city, and between the three vessels cruise vacations are offered all year long from Bayonne. Thanks primarily to the activity of Royal Caribbean’s two ships, the Legend of the Seas and the Explorer of the Seas, which offer the vast majority of the cruises out of New Jersey, the Bayonne port is actually a fairly major port for cruise ships. (The Celebrity Summit is the other ship that sails out of Bayonne, but it doesn’t offer nearly as many cruises as the combined total of Royal Caribbean’s sailings.) Given that lots of people sail out of this port, we figured it would be helpful to let people know what things they can do and see before they leave the Bayonne port. If you find yourself in Bayonne awaiting the departure of your cruise, here are few things – sights, attractions, etc. – that might help you pass the time.

When writing about what to do in Bayonne, we are tempted to merely say “leave Bayonne and go to any of the world-famous surrounding areas.” In fact, this is our first recommendation, as nothing in Bayonne proper (it’s a small city of a little over 60,000 people) even approximately compares with what is right across the New York Harbor, namely, New York City. Indeed, NYC is so close that on a clear day or night the Bayonne port gives you particularly close view of both Brooklyn and Lower Manhattan. So, if you are going to be in the Bayonne area for any more than, say, a few hours before or after your cruise, the first place we recommend going is, not surprisingly, NYC, one of the great tourist destinations of the world. Staten Island and Jersey City are also right by Bayonne, so if you can’t go to NYC or have already been there several times, you might also check out one of these areas. (Staten Island, being a borough of NYC, is of course part of the city, but lots more is found on the other side of the Hudson River.) Finally, Ellis Island is also only a few miles from Bayonne, and this is probably worth visiting before you spend your time in Bayonne.

All that said, we are primarily concerned with what to do in Bayonne, so that is where we turn our attention now. By far the most notable attraction or sight in Bayonne is the ‘To the Struggle Against World Terrorism,’ a monument that commemorates the victims of the 9/11 attacks. The monument is slightly hard to get to, which means that it isn’t a particularly famous or popular sight, but those who go are generally impressed and report that it is powerful memorial. Fortunately, it is easy to get to from the port, considering it is actually on the port, right on the edge of the Hudson River. (This is one of the couple of places you would go to get a view of Brooklyn anyway.) In truth, this 9/11 monument is essentially the only noteworthy attraction in Bayonne, but this is not to say that it is the only place to see or go. If you go to the other side of Bayonne, away from the port and looking toward Newark, you will find Bayonne Park, which is a large, well-maintained area of open space. Again, this isn’t the type of place you would visit Bayonne to see, but it is a nice place to kill some time if you are waiting for your cruise. The only other thing worth mentioning in Bayonne is the Bayonne Golf Club. While extremely nice and renowned, this is a highly exclusive club that people can join by invitation only, so it’s not like you can simply play a quick round as you are waiting for your cruise (unless you have great connections).

We are sure there is much to like about Bayonne and we of course don’t mean to imply that it isn’t a nice city. However, there isn’t much to do for an average vacationer waiting for a cruise, so we recommend seeing some of the surrounding areas if you are there for more than a few hours. However, if you are there for a short period of time waiting for your cruise, you should definitely check out the ‘To the Struggle Against World Terrorism’ monument, and perhaps the Bayonne Park if you still have time after seeing the memorial. Bayonne isn’t a world-renowned tourist destination, but its surrounding area is, and in any case Bayonne has a few things to offer too.

← The Definition of a Luxury Cruise
Mississippi River Cruises: An Overview →