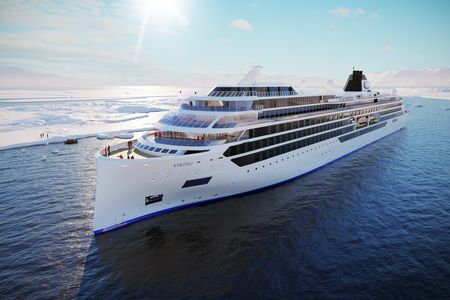 Viking Cruises is making big moves into a lesser-known market: the Great Lakes. Viking, which is based out of Switzerland, is largely known for a mixture of river cruises and crazy arctic expeditions (quite the spread, huh?), but their new plans have them headed to some familiar locations in the U.S. Viking as a company has changed quite a bit since their inception, and this decision will take them into a completely new phase. Torstein Hagen, their founder, said in a statement: “We began as Viking River Cruises; then we evolved into Viking Cruises with the addition of ocean cruises. Today we stand singularly as Viking.”

While their Great Lakes cruises won’t be taking off until 2022, Viking still gave an inside look on what to expect. There will be four different itineraries, including Undiscovered Great Lakes, which goes from Thunder Bay, Ontario to Milwaukee over the course of eight days and travels across Lake Superior and Lake Huron. It also hits the Apostle Islands and Mackinac Island. There’s also Niagara and the Great Lakes, which begins in Toronto and again heads to Milwaukee over eight days. It stops in Detroit, as well as (obviously) Niagara Falls. Next, there’s Great Lakes Explorer, which reverses Undiscovered’s itinerary by taking eight days and going from Milwaukee to Thunder Bay (neat!). Finally, there’s a 13-day trip called Canadian Discovery which starts in New York and ends in Toronto. On the way, passengers will see the St. Lawrence River, Saguenay Fjord, Moisie River, and Lake Ontario. For the first three itineraries, prices begin at around $6500; the longer Canadian Discover begins closer to $8000.

Accompanying the announcement of these new itineraries is the reveal of two new ships for the cruise line. Coming in January 2022 is Octantis, which will take on these Great Lake trips, as well as some to Antarctica. Polaris is the sister ship, launching in August 2022, and will sail to Antarctica and the Arctic. Both will have a passenger capacity of 378 across 189 staterooms. One cool feature of the cabins is a so-called Nordic balcony, which is a big, glass wall that can be lowered halfway to take a closer look at the surroundings. Both ships promise multiple restaurants, a fitness center and a spa, as well as three different temperatures of pool to choose from.

The most exciting feature of these new ships, however, is a feature called The Hangar. New to Viking, its a section of the ships that acts as a sort-of dock for smaller vessels that passengers can take out and explore with. The ships are small and high-speed, designed for a quick jaunt before coming back. The Hangar will also be home to scientists that are studying the environments that the boat is in. Finally, there will also be two submarines that passengers can use to head underwater and check out a different world. Sidenote: it seems like submarines are very slowly becoming a relative norm on luxury cruises…we like it!

Was that a lot of information to take in all at once? Probably, but that just means that big things are coming for Viking in the next couple of years, which is great! If you’re looking to check out some breathtaking North American locales, you can book a trip across the Great Lakes over here.