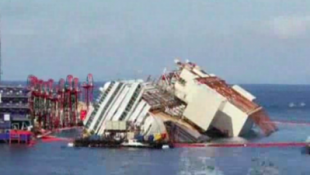 For the first time since the cruise ship slammed into rocks off the coast of Isola del Giglio, Italy, a disaster that claimed 32 lives, the captain of the Costa Concordia, Francesco Schettino, climbed aboard the vessel yesterday with a team of experts. The experts where appointed by the court to determine if the Costa Concordia wreck was caused by anything other than human error, and Schettino accompanied them at the request of his attorneys.

Schettino is currently on trial in Italy and is facing multiple charges, including manslaughter and abandoning ship. It is of course an open question to be determined by the court whether Schettino is responsible for shipwreck, but certain facts seem to work against his defense. His decision to steer the ship off its automatic course to salute the inhabitants of Isola del Giglio obviously precipitated the disaster, and it is indisputable that he abandoned the ship before every passenger was off, as a transcript of the emergency call between the Italian coast guard and Schettino that took place right after the wreck shows.

On the other hand, a captain is not exclusively responsible for the physical movements of a cruise ship – moving a large vessel depends on multiple people – and it is still unclear what the crisis center staff told Schettino as the ship was sinking. No one died when the vessel hit the rocks, so the 32 deaths technically resulted from a failed evacuation, and this could shift some of the blame to the first responders. There are also questions about the failings of the ship itself – Schettino has noted that the vessel’s watertight doors malfunctioned, letting more water into the ship – and of course this is exactly why the team of experts recently surveyed the wrecked Costa Concordia.

The captain was able to board the ship thanks to a parbuckling operation that took place a few months ago. By harnessing leverage, the massive sunken ship was raised, or rotated to an upright position. Currently, it sits atop underwater platforms right outside Giglio’s port.