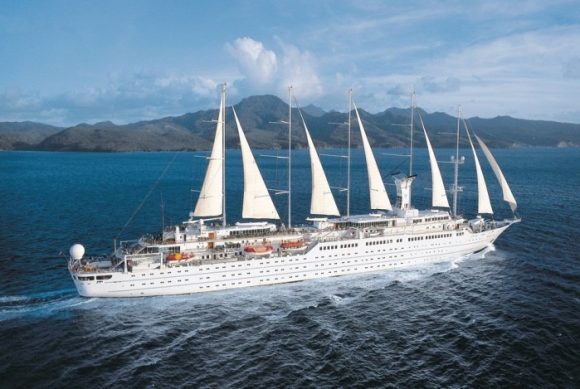 Windstar Cruises, while not being one of the biggest names out there, is definitely a company that those who care about luxury cruises should know about. They’ve been around since 1984 and have definitely established themselves among other luxury companies, even earning a nod from Conde Nast in 2014 for being the World’s Best Small Ship Cruise Line. They’re definitely small (we’ll get into that in a second), but are they still the absolute best? Let’s check it out!

Windstar’s fleet is both small in terms of number of boats and the size of each individual craft. They currently sail six different ships that come in three different sizes. The Wind Star and Wind Spirit both fit 148 passengers and 90 crew members, and are modern cruise ships that feature sails. Star Pride, Star Breeze and Star Legend can fit 208 passengers and 164 crew members and look a lot more like the typical cruise ships of today (i.e., no sails). Finally, their largest ship is the Wind Surf, which has room for 368 passengers and 214 crew members. The Wind Surf also has sails, like the two smallest ships.

Windstar isn’t the cheapest cruise line out there, but hey, none of the luxury lines are. The current cheapest itinerary on their site begins at $999 for a week long excursion to Costa Rice and the Panama Canal. They are currently only advertising 16 itineraries, and prices vary depending on each, though most exist somewhere in the $2000 to $6000 range. One thing to look out for is Windstar’s Grand Tours, which are extended length trips that make a variety of exciting stops. The one currently on the site is just a bit over $20,000 and 66 days long. If you’ve got the money and the time, why not? In general, you’ll be paying less for Windstar than some competitors, but keep in mind that’s because their cruises are not all-inclusive.

A lot of the activities on Windstar cruises take place at the ports of call during the day. That being said, on-board you’ll likely have access to a spa, gym and a Watersports Platform that features water skiing, kayaking and more. At night, there’s also live music on board. In terms of food, the dining is particularly impressive on Windstar ships. The Veranda offers breakfast and lunch in buffet and full service forms. There’s Amphora, a dinner spot with no pre-assigned seating, an outdoor eatery called Candles (romantic, eh?), and a couple other alternative restaurants depending on the ship. There aren’t a huge variety of options, but what is there is high quality.

Windstar is generally considered a great and not-too-expensive option for those looking to cruise in luxury. It’s not hugely fancy, yet still boasts a nice passenger to crew ratio and an intimate atmosphere thanks to the size of the ships. It also has a reputation as a great company for couples.

If Windstar sounds like the cruise line for you, head on over to their website to see their current itineraries. The list isn’t too overwhelming and would be a great place to start looking for those wanting a luxury cruise.

← U.S. News Travel Releases Best Cruises Ranks
How to Go About Picking Your First Ever Cruise →