Google seems to be involved in just about every industry, including the shipping industry. Well, probably not the shipping industry exactly, but Google does evidently own two barges, barges that as of yet have no discernible purpose. The first Google barge came to light recently, after reports surfaced that indicated that Google was building a barge in the San Francisco Bay. Shortly thereafter, it was revealed that there is another Google barge near the coast of Maine. What role could barges possibly play in the Google empire? 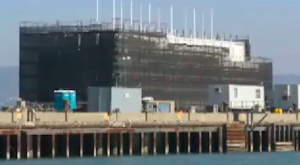 The answer to this question is a matter of intense speculation. Besides some of Google’s employees and perhaps a few government inspectors, all of whom are presumably sworn to secrecy at this stage given the lack of public information, no one has any definite idea for what the barges will be used. Some believe they will be used as data storage centers, with the theory being that data facilities floating on water will be easier (and cheaper) to keep cool. This makes some sense, but water can also damage data storage equipment, so shifting data from land to sea is certainly not without risk.

Others posit that Google will use the barges for customers. For instance, the barges might serve as elaborate platforms to display Google’s high-profile products to VIPs and other important clients. A few different reports have envisioned these mobile showrooms with rooftop bars and other amenities. We see no reason to dismiss this out of hand, but images of the San Francisco barge seem to at least partially call this into question. As of now, the barge is nothing more than a four-story stack of white shipping containers partially surrounded by scaffolding. Perhaps these containers are merely storing Google products (like Google Glasses, as most people seem to speculate) for now, and the barge will later be transformed into a showcasing venue? Of course, we have no idea.

So, the Google barges are at present a mystery. No one knows what function they will serve, or at least no one who will share this information knows what function they will serve. Maybe they are floating data centers that will harvest the cooling power of water, maybe they are particularly extravagant showrooms designed to impress whoever it is that Google deems necessary to impress, or maybe everybody speculating about the matter should relax for a moment and wait for more information to become available.

← How to Book a Booze Cruise in NYC
Oceania Cruises: An Overview →