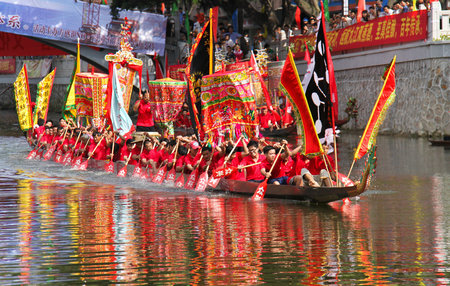 If you can’t go on a boat this summer, how does watching one sound? Actually, you can watch more than 100 splendid boats in all their sailing glory at the Hong Kong Dragon Boat Festival in New York.

In celebration of the 5th month of the lunar calendar, more than 120 dragon boat teams converge on Meadow Lake in New York every August to compete in one of America’s largest dragon boat festivals. Take in the spectacle on the water, and enjoy a wide array of international music, martial arts, crafts, dance and cuisine at the Hong Kong Dragon Boat Festival in New York this August 12th and 13th.

This exciting NYC event is an annual sporting and multicultural event in New York that is held in Flushing Meadows Corona Park in Queens. The Hong Kong Dragon Boat Festival celebrates the 5th moon (or the 5th month) of the lunar calendar, and provides audiences with traditional Chinese foods, Chinese performances, and more than 120 dragon boat teams from across North America. Depending on the competitive division, teams compete for cash prizes, trophies and other prizes.

The Hong Kong Dragon Boat Festival in New York features events for the entire family including the NY Championship Race on Saturday, the US Dragon Boat Open Championship Race on Sunday, an opening parade, and specialized races for youth, women, and charity. Moreover, an impressive arts and entertainment program showcases some of the best multicultural artists in New York, including the Shaolin Temple Warrior Monks demonstrating their Kung Fu skills, the Drum Spirit of China, and other performers who perform traditional music and dance from China, Mexico and Peru. Booths located around the main stage area at the Festival host folk art and craft demonstrations, and a food court serves a culturally diverse menu. Admission to the Hong Kong Dragon Boat Races is free and this New York Event takes place rain or shine.