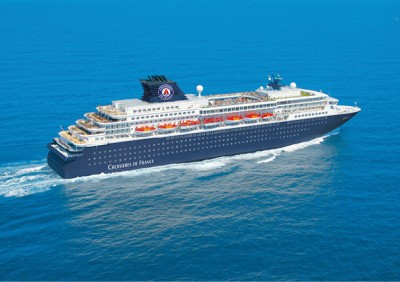 CDF Croisières de France, as the name pretty clearly suggests, is a French cruise line, an enthusiastically French cruise line, in fact. It is headquartered in Paris and is focused almost exclusively on the French cruise market. The language used on board CDF cruises is French, and the cruise line’s website is exclusively in French. (As anyone who deals with multilingual European sites on a regular basis knows, it is pretty rare for a company or institution of even modest size not to have an English version of their website.) So, why write in English about CDF Croisières de France, given that the cruise line evidently has no interest in reaching the English-speaking peoples? Well, there are few different reasons, and we like to leave no cruise line unexplored, so we’ve provided a basic overview of CDF below.

Although thoroughly French, CDF is a subsidiary of Pallmantur Cruises, a cruise line based in Spain that caters to Spanish-speaking customers. Pallmantur is itself owned by Royal Caribbean International Ltd., which is a Norwegian-American company. It is also the second-largest cruise ship operator in the world, so it markets itself to the speakers of many languages, including English, to keep the linguistic theme running.

CDF was founded in 2007 and started operating with one ship, the Bleu de France, in 2008. After two years, CDF sold the ship to Saga, an Over-50’s cruise line, but continued operating the vessel for another two years, until 2012, when the Horizon entered service for CDF. Horizon is currently the only ship in CDF’s fleet, although the Zenith will be joining it next year. Both ships have a gross tonnage of about 47,000 and can accommodate a little less than 1,500 passengers. By cruise-ship standard, this makes the vessels modestly-sized, and since CDF is currently operating only one ship, it has captured only a small fraction of the market (about .4 percent, to be precise). At present, the Horizon cruises around Europe during the summer season, and then repositions to the Caribbean during the winter season. This might change, however, when CDF starts operating two ships.

Even though CDF is focused more or less only on French cruise vacationers, it is not as if citizens of other countries are prohibited from taking a CDF cruise, which is good news, considering that all of CDF voyages are all-inclusive. All meals are covered by the price of the ticket, and you can drink as much alcohol as you want at no additional charge. Even the tips are included when you pay for the cruise. However, if you don’t speak French, you would probably have a fairly rough time on board the ship. You might be able to drink and eat to your heart’s content, but you’ll have a hard time connecting with, or even communicating with, other passengers, and this will of course compromise the cruise experience to a considerable degree.

CDF may not by law be exclusively for the French, but in practice it almost is. The people of France are obviously their target passengers, and they don’t make much of an effort to reach anyone who doesn’t know French. However, if you do speak some French and an opportunity to take a CDF cruise arises, it is definitely worth considering. They are all-inclusive and sail around two well-loved cruise destinations (Europe and the Caribbean), and there is nothing wrong with stepping outside of your comfort zone anyway.

← How to Find a Repositioning Cruise
Fred. Olson Cruise Lines →