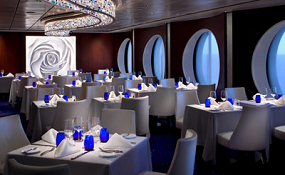 All cruises are spa cruises, at least in the sense that essentially every cruise ship of every major cruise line has a spa on board. Like swimming pools, live entertainment, and casinos, spas are simply a part of the cruise experience. However, this isn’t to say that all cruise spas are equal, or that every cruise can be regarded as a “spa cruise” in the same way. On some ships, spas are merely one amenity among many, and the spa’s offerings are not emphasized above any other diversion. One other ships, the spa is the main event, and in fact the entire cruise can essentially be treated as one extended stay at a spa. The latter type of cruises are not very common, but they are spa cruises in the fullest sense of the term, so we’ll focus on them. Below we offer a guide to such spa cruises, reviewing their general features and examining a couple of specific examples.

The concept of a cruise that doubles as a spa is essentially the brainchild of Costa Cruises. Their Samsara Spa, which is found on the Costa Pacifica, Costa Serena, and Costa Luminosa, was the first of its kind. It essentially operates as a destination spa that just so happens to float around the world. When traveling on the Pacifica, Serena, or Luminosa, it is possible to experience a “total wellness and relaxation holiday,” as their promotional materials put it. This is interesting not only in that a cruise line is more or less advertising itself as a spa, but also in that health is at the center of the cruising experience. (In a lot of people’s minds, cruises are supposed to be all-you-can-eat or all-you-can-drink affairs.) Another example of a destination spa at sea is AquaSpa, which is offered on five of Celebrity Cruises‘ ships: Equinox, Eclipse, Solstice, Reflection, and Silhouette. The AquaSpa operates like the Samsara Spa by offering an immersive experience – your cruise vacation is your stay at AquaSpa – although of course each line has their distinct offerings.

In general, Samsara Spa and AquaSpa do have similar operating philosophies, however. On the selected ships on which the spas are run, passengers are emerged in a spa-oriented experience. Cabins have special spa-related features (like multi-headed showers and large baths), and meals and daily activities are designed to be both healthy and maximally relaxing. On a cruise that features an AquaSpa, for instance, you might enjoy a night of sleep on specialty linens, drink a smoothie at the AquaSpa Cafe shortly after waking up, and then head to the steam room to loosen up before your late morning massage appointment. Obviously, you are not a slave to the spa and you are free to explore the ship and set your own agenda, but the spa is the focal point of the excursion, the primary service provider around which the rest of your vacation revolves.

In focusing on spa cruises defined in the most robust way possible, we don’t mean to imply that the average cruise line’s spa offerings are inadequate or unsatisfactory. For the majority of cruisers, the spa plays only a limited role in their vacation, if it even plays a role at all. Receiving a spa treatment on a cruise can cost quite a bit – basically the rates of an upscale salon are to be expected – so plenty of people forswear them altogether. Spa cruses are clearly not for everyone. However, if you love spas and want to experience them in an entirely new way, they are worth checking out as you plan your next cruise vacation.

← Carnival Brings Carnival Splendor to Norfolk, Virginia
The Port City of New York: Things to Do and See Before Leaving on a Cruise →