The sinking of the Costa Concordia was by far the worst ship disaster in recent memory. It captured the world’s attention, and for good reason. Modern cruise ships are remarkably safe, and even if they have problems, which they occasionally do (just ask Carnival), 32 people don’t die as a consequence. It is therefore not surprising that people have been following the Costa Concordia story closely, especially in recent days, during which the ship was raised successfully and human remains were found. However, there is so much currently happening with the Costa Concordia – each day seemingly brings new updates – that we thought we’d call your attention to the major stories. Below is all you need to know about the news swirling around the Costa Concordia, and we’ve also included some awesome pictures of the raising of the ship for good measure.

Although a hot topic at the moment, we should not forget that the Costa Concordia disaster occurred almost two years ago, so you might wonder what happened between the accident and the raising of the ship a couple of weeks ago. Outwardly, not a lot, as the ship continued to lie motionless off the coast of Isola del Giglio, Italy. However, during this time, plots were being laid and preparations were being made to raise the ship, which was an exceedingly complex operation, as we reported in our article about the run up to the raising of the Costa Concordia. It was the raising process, which was completed successfully, that brought the Costa Concordia back into the headlines. That is why you have been hearing so much about the Costa Concordia as of late, and that is why we are summing up the major stories. But before moving on to any other stories, take a look at these great shots of the ship being raised: 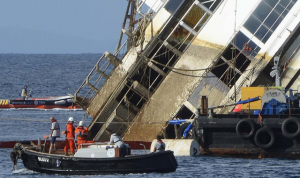 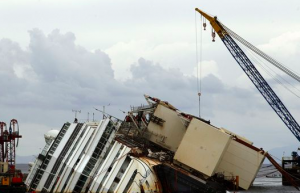 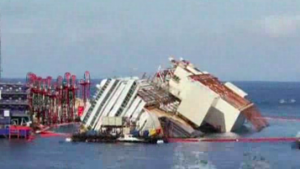 (As you can see, the last photo is a bit blurry, but we thought we’d include it because it provides a nice faraway perspective of the ship.)

About a week and half after the ship was successfully raised – that is, a few days ago – a new story broke: human remains were found near the central part of the ship. The fact that two bodies were believed to be in or around the ship was one of the reasons that the raising of the ship was such a delicate operation. Thirty people were confirmed dead, and another two were missing and presumed dead. The “presumed” part of that sentence is an impediment to closure, so finding the remains of these two missing persons would be a big step forward. As of this writing, the remains have yet to be positively identified as the two missing victims of the shipwreck, but the circumstances suggest that recovery workers might have found a match.

Finally, there is the ongoing drama surrounding the ship’s captain, Francesco Schettino, who has been at the receiving end of an enormous amount of scorn and blame after the disaster. (Whether Francesco Schettino is entirely responsible for the disaster remains an open question.) What’s been going on with him recently? Primarily, he has been relentlessly deflecting responsibility for the crash. He claims he has become a scapegoat for the blame due to others, and in particular he has accused the helmsman of the ship for steering the ship into the rocks that tore the side of the vessel open. To supplement his defense, Schettino’s defense team requested to further investigate the wrecked ship to attempt to prove that malfunctioning watertight doors caused the Costa Concordia to sink. Just a few days ago, the judges presiding over the trial agreed this request, which could delay the trial by several months.

That is, in short, what’s happening with the Costa Concordia at present. The story is still far from over, however, so we’ll keep writing about the ship disaster and its aftermath until everything concludes.