Almost exactly 100 years ago, the Titanic met its doom by striking an iceberg – the infamous Titanic iceberg, which could itself be properly called a titanic iceberg – in the Atlantic Ocean. Most people today know this much, and often a lot more, about the 1912 Titanic iceberg collision, even though it happened so long ago. This is the nature of great historical tragedies. For the most part, they tend not to be forgotten (nor should they be), and this is true to such an extent that we even remember the years in which they occurred. When many think of 1912, the Titanic iceberg crash comes to mind, as if “Titanic 1912” were as natural of a phrase to remember as “Obama 2008.” “1912” and “Titanic” are inextricably linked. But despite the level of detail known about the Titanic wreck, not many seem to consider the Titanic iceberg itself. They know the Titanic struck an iceberg, and they know it happened in 1912, so why is so little ever said about the actual iceberg the Titanic ran into? The Titanic iceberg is as much a part of the story as anything else, and so here we provide some information about this forgotten player in the Titanic tragedy.

Interestingly, the iceberg the Titanic struck was not particularly big. It protruded out of the water only a little, and it wasn’t even high enough to reach the bridge of the ship (i.e., the platform from where the ship is commanded). However, the great majority of an iceberg is underwater (around nine-tenths of the mass of an iceberg is under the surface), so what appears to be a small iceberg above water is actually a huge mass of ice. This means that when an iceberg is struck, it doesn’t budge, and hence the damage it caused to the Titanic.

Not surprisingly, the iceberg that struck the Titanic is long gone today. On the night the Titanic struck the iceberg, the water was quite cold, but not freezing. (It was believed to be around 28 degrees Fahrenheit, or -2 degrees Celsius). This temperature of water would quickly kill anyone who fell in it (and indeed it did kill many who fell in it), but an iceberg would melt relatively quickly in it. (The fact that the iceberg was melting contributed to its transparency.) An average iceberg in the North Atlantic (where the Titanic went down) would only drift around the sea for two or three years. So no matter when the iceberg entered the ocean, it is certainly gone today. However, a couple of pictures were taken of what was believed to be the Titanic iceberg soon after the wreck. The pictures were taken by captains of other vessels that passed through the approximate wreckage area shortly after the Titanic wreck. Here is one such picture: 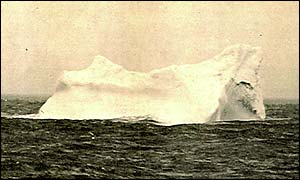 Obviously, the 1912 Titanic iceberg collision is first and foremost a tragedy centering on humans and the many lives that were lost in the wreck. However, there are other factors of the disaster that are interesting and even helpful to consider, and one of those factors is the Titanic iceberg.