Like most things of historical interest, there is a museum for the Titanic, or rather there are Titanic museums, as there are actually several. (There are also a number of Titanic exhibits in more general museums.) If there is room in this world for a SPAM museum and a funeral history museum, then there is definitely room for multiple museums about the Titanic. Although there are several, one Titanic museum in particular draws the most attention. Appropriately, it is located in Belfast, the city in which the Titanic was constructed. Its name is technically Titanic Belfast, but many people simply know it as the Titanic museum. It bills itself as “the world’s largest Titanic visitor experience,” and it is quite a site to behold.

Although it is already world renowned, Titanic Belfast is new, having been officially completed only earlier this year. The project started back in December 2009, when the foundation of the building was poured. (This was, interestingly, the largest concrete pour in the island’s history.) The entire building is enormous – the main exhibition alone is 118,403 square feet (11,000 square meters), and the entire building, which includes a 500-space underground parking lot, is 150,700 square feet (14,000 square meters). As a point of comparison, Belfast City Hall is only half the size of Titanic Belfast.

But the size is really a secondary consideration. The building is a triumph of architecture, and it is now one of the main tourist attractions of Belfast. The outside of the building is lined with thousands of three-dimensional aluminum plates, the reflectiveness of which is enhanced by pools of water that surround the base of the building. The effect is even more pronounced because the outside facade leans out at a 25-degree angle. There are over three thousand aluminum panels, and two thousand of these have unique shapes. This creates a “startlingly random effect,” to use one of the promotional materials’ more inspired turns of phrase. Once inside the building, in the central atrium, you will be confronted by several long glass escalators. After you reach the top, you can begin to explore the Titanic.

Here is a picture of the building taken shortly before it was opened: 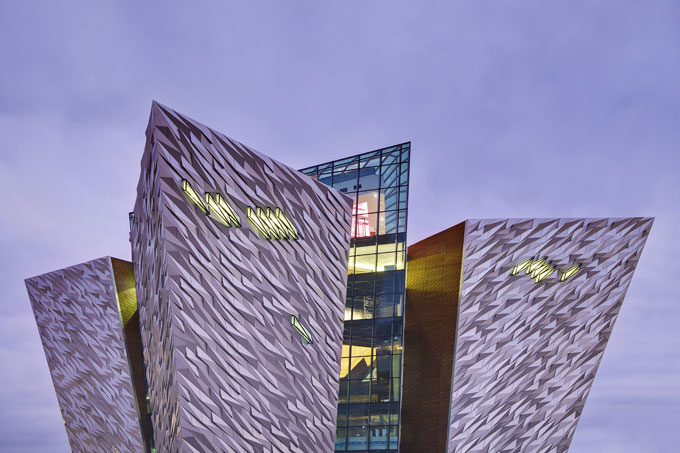 Of course, a museum, however impressive it may look, is ultimately only as good as the educational experience it facilitates, and Titanic Belfast will not disappoint in this regard. The museum explores every aspect of the Titanic in extreme detail, from the very start of its construction to the undersea explorations of the wreck. In fact, it goes even beyond this, as there is a gallery about Belfast the city, that explains the cultural context in which the Titanic emerged, and there is also an Ocean Exploration Center attached to the museum that focuses on marine research and education. Since the museum was just built, the whole Titanic story is explained in a new and technologically advanced way, with interactive features, full-scale reconstructions, and so on.

If you like museums and you are even vaguely interested in the Titanic, a visit to Titanic Belfast should be incorporated into any trip that takes you near Belfast.