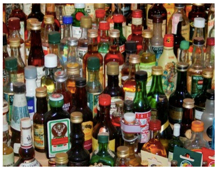 A few things could be meant by the term “booze cruises,” all of which, naturally, involve booze in one way or another. So, what we propose to do below is outline the various uses of the term “booze cruise,” and in so doing we’ll indicate what we think is the most common understanding of this term. We’ll also explain what each type of booze cruise is, giving you an idea of the various cruises out there for which alcohol serves as a focal point.

In some parts of the world (notably Europe), a booze cruise is basically a liquor run to another country. The flow tends to be from the UK to Belgium or France (that is, across the English Channel/North Sea – that’s why it’s a booze cruise), where alcohol and tobacco are cheaper. Provided these goods are for personal use, no limit is placed on the amount you can transport within the E.U., so the cruise ticket pays for itself because of pounds sterling saved. (Because the booze and tobacco must be for personal use, official eyebrows will be raised if you bring back an unreasonable amount of either. This has become even truer since 2011, when the “will grab officials’ attention” levels were lowered. Here is some more information about tax and duty on goods brought to the UK from the European Union.) To American readers, this type of booze cruise will be largely foreign (no pun intended – actually, having noted the pun, we acknowledge it and will therefore embrace it). Americans might hop over borders for the purposes of fermented drink in the U.S. – like going to Mexico for cheaper alcohol, or driving from Minnesota to Wisconsin to get beer on Sunday – but they don’t do this via cruise.

Another type of booze cruise is a regular cruise (i.e., a multiple-day trip on a cruise line) on which passengers can drink an unlimited amount of alcohol. Some cruises are “all you can drink” by default. On these cruises, which are almost always offered by luxury cruise lines, alcohol is generally only one of many things that are free. On other cruises, you have to buy a special “all you can drink” package, which tend to cost about $50 a day. Any cruise on which passengers can drink an unlimited amount of alcohol could be called a “booze cruise,” although the cruise lines probably wouldn’t embrace this label, especially not the luxury cruise lines. (Regent Seven Seas Cruises’ target clientele, for instance, isn’t college students and problem drinkers, or at least they aren’t part of their target clientele by virtue of being booze hounds. We don’t mean to imply that a wild alcoholic of sufficient means won’t be enthusiastically welcomed on board; he or she probably will be.)

While these first two cruises could reasonably be called “booze cruises,” we suspect most people use the term to refer to the short sailing trips you can take in city harbors and rivers for the sake of partying. A classic example of such a cruise is a booze cruise in NYC. On these types of cruises, you pay a fee to be allowed on a boat – sometimes this fee will cover all your drinks for the night, making it a shorter version of the all-inclusive cruises discussed above – which generally floats around for several hours and then heads to shore at approximately the time a bar would close. (Obviously, there is variation – a booze cruise could take place in the afternoon, for example.) Basically, you are paying for the novelty of drinking at a floating bar, and in addition you often get a nice view of the skyline in whatever city you happen to be boozing in.

In short, there are many uses of the term “booze cruise,” but some uses are more appropriate than others.

Article Name
Booze Cruises
Description
A few things could be meant by the term "booze cruises," all of which, naturally, involve booze in one way or another.
Author
All About Cruises and More
Comments: 0 Posted by: Cruiser Evan Categories: Theme Cruises

← The Port City of Long Beach: Things to See and Do Before Leaving on a Cruise
Grandeur of the Seas, the Royal Caribbean Ship Possibly Plagued by Norovirus, is Back at Sea →