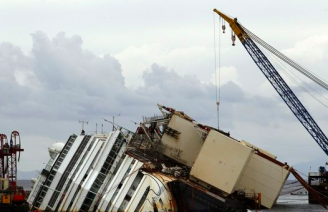 The Costco Concordia has completed its last voyage. After two years of laborious and highly technical work, the Costco Concordia salvage operation finally reached its end when the ship was pulled into the port of Genoa yesterday morning. The once-elegant cruise ship, which had 13 decks and could accommodate 3,780 passengers, will be scrapped. The memory of the disaster and its long aftermath will start to fade as the ship disappears piece by piece.

The immediate cause of the ship’s arrival in Genoa is the refloating operation that began a little more than a week ago. The ship was successfully raised about 40 feet from its underwater resting position, allowing the vessel to be pulled by tugboats to Genoa. However, a salvation effort has been underway essentially since rescue operations ceased. It was the largest salvation of its kind in maritime history, involving several difficult and hazardous phases, like the parbuckling operation last fall, which brought the ship to an upright position.

Although the refloating of the ship largely marked the end of the salvation operation, the ship still needed to remain in one piece on its four-day journey back to Genoa. The trip covered 170 miles (280 kilometers), and there were fears that the hull couldn’t withstand the stresses imposed by the voyage. This was particularly concerning because the ship had to be pulled through a marine sanctuary, where a disintegrating ship could cause immediate, large-scale problems. Nothing of the sort happened, and even if it had the Costa Concordia was accompanied by an envoy of vessels designed to deal with basically any problem. No more chances were to be taken with the Costa Concordia – it had wrought enough destruction.

Although a major chapter of the Costa Concordia story has closed, there is still one major loose end: the fate of the ship’s captain, Francesco Schettino, who is currently on trial for his role in the shipwreck. However, at least the ship itself, which could have ended up as a grim and environmentally dangerous tourist attraction off of the coast of Giglio, is finally taken care of, and that’s a large point of resolution.