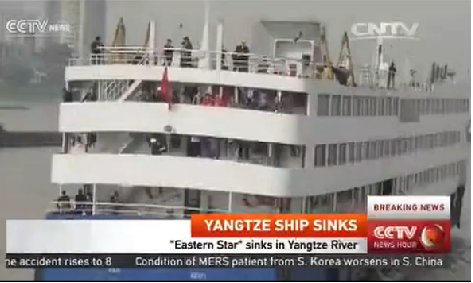 Shipwreck on the Yangtze River Likely the Worst in Chinese History

The shipwreck on the Yangtze River is as bad as initially feared. At this point, four days after the Eastern Star sank on a stretch of the river that winds through the Hubei province after encountering severe weather, it is all but impossible that more survivors will be found. Of the 456 passengers who were on board the Eastern Star, which has also been translated as the “Oriental Star,” only 14 survived, the same number we reported the day after the shipwreck occurred.

If the death toll officially rises to 442, it will be the worst maritime disaster during peacetime in Chinese history, according to Quartz. At present, the official death toll stands at 103.

The hope for many days following the sinking was that passengers, many of whom were in their 60s and 70s, could have found pockets of air in the capsized vessel. Rescuers worked for days on the hull of the ship, the only part of the vessel not under water. With their ears pressed to the ship, they tapped the exterior with small hammers to see if anyone from inside the ship responded. Several holes were cut in the hull as well, but extreme caution had to be exercised because the procedure could have caused the ship to lose buoyancy and sink further into the river, all but ensuring that no future survivors would be found. These efforts, combined with diving explorations of the ship and a large search operation around the site of the wreck, proved largely fruitless, however, given that less than three percent of the passengers on board survived.

With the hope of finding more survivors effectively extinguished – China’s transport ministry spokesperson said that the “overall judgment is that there is no chance of people being alive” – the process to salvage the ship has now begun. Floating cranes have flipped the vessel upright, allowing the ship to be thoroughly searched and drained, according to CNN. Once this process is complete, the ship will be lifted from the river, ending the rescue operation that has been underway for almost a week.

The story, however, is far from over, and questions remain about the shipwreck and its cause. The captain and chief engineer of the Eastern Star survived and are now in police custody. Early reports of the sinking indicated that the ship might have been struck by a tornado, and the captain and engineer have reportedly confirmed this, but authorities have not released more information about what they have said. Even if severe weather is responsible for the wreck, it still isn’t clear why the ship found itself in the situation that it was in. The stretch of the Yangtze River where the vessel went down is a busy waterway, but there were no other ships in the area when it sank. Evidently, these other ships heeded weather warnings, raising the prospect that the captain of the Eastern Star didn’t see or ignored advisories issued by the Hubei Meteorological Administration before the storm.

Predictably, many are calling for a full investigation of the shipwreck, including top government officials. Perversely, though, Chinese authorities have also been busy trying to control and censor coverage of the tragedy. News outlets have been ordered not to send reporters to the scene, and Chinese journalists have been instructed to report only what has been released by state-run news organizations. Journalists have also been told to focus on the “positive” side of the story, like the few successful rescue operations. There aren’t many upsides to a shipwreck, though, and no amount of government censorship can obscure this.

Article Name
Shipwreck on the Yangtze River Likely the Worst in Chinese History
Description
If the death toll officially rises to 442, it will be by far the worst maritime disaster during peacetime in Chinese history.
Author
All About Cruises and More
Comments: 0 Posted by: Cruiser Evan Categories: Cruise News, Ship Disasters