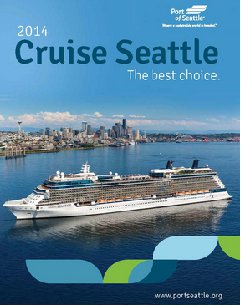 The Port City of Seattle: Things to See and Do Before Leaving on a Cruise

Along with Vancouver, Seattle is the major cruise port of the Pacific Northwest. Nearly a million people will pass through the cruise terminals in 2014, and seven cruise lines operating 11 vessels are based in Seattle. If you are taking a cruise to Alaska and/or Canada, there is a reasonably good chance you’ll find yourself in Seattle, and if you have some spare time before or after your cruise, we have compiled a guide of things to see and do.

Like New York, there are two cruise terminals in Seattle, and the cruise line you are sailing with determines which part of the city you will sail from. If you are cruising with Norwegian or Oceania, you will depart from the Bell Street Cruise Terminal at Pier 66. If you are with Carnival, Celebrity, Princess, Holland, or Royal Caribbean, you’ll be sailing from the Smith Cove Cruise Terminal at Pier 91. Both terminals are on the western side of the city, in the maze of land and ocean that makes up the Puget Sound. The Pier 91 terminal is a few miles north of the Pier 66 terminal, so they are fairly close, but by no means side by side. This naturally presents us with certain challenges when describing what to do before or after your cruise, as it depends on which terminal you sailing from. So, we will describe attractions that are near both terminals, but note which terminal it is closer to.

Before moving on, we should mention that if you have a day or more in the city, it essentially doesn’t matter which terminal you are leaving from, as you’ll likely have time to see whatever part of Seattle you want to. Of course, this includes the sights we discuss near either terminal, but we focus on these attractions because our guide doesn’t operate on the assumption that passengers have ample time to do whatever they want. If they did, this would just be a standard overview of things to see and do in Seattle, as opposed to a guide of things to see and do before or after a cruise.

Overall, there are definitely more sights of note near the Pier 66 terminal, which is closer to the heart of Seattle proper. And when you think of the heart of Seattle, one building that likely comes to mind immediately is the Space Needle, which is only about a half a mile from Pier 66. And the great thing about the Space Needle is that it is surrounded by lots of other things to see. The Pacific Science Center, an enormous science museum, is right by the Space Needle, and so is the Seattle Center, where there are always an assortment of events and programs, as well as a number of restaurants and bars. The Chihuly Garden and Glass, an extremely highly regarded art museum, is in this area too. If you have kids, the Seattle Children’s Museum is also in the vicinity, right by the Seattle Center, in fact. Finally, the Bill and Melinda Gates Foundation is in the Space Needle area. The headquarters is worth checking for the simple reason that much good emanates from the Foundation’s beautiful buildings, but there is also an onsite visitor center, which showcases some of the organization’s philanthropic work. So, there is plenty to do if you find yourself at the Pier 66 terminal with time to spare.

Of course, you can get to this part of Seattle from Pier 91 too. Public transportation or a car could get you there in about 20 minutes, and if you have the time and the interest, the Space Needle and the surrounding area is definitely worth checking out. Indeed, this is probably the direction you should head if you can manage it because there really isn’t much in the immediate vicinity of Pier 91. If you are stuck in this area, though, there are at least a few parks in which you could kill some time. Smith Cove Park is right by the terminal, and so is Ursula Judkins Viewpoint, which is a great place to get a view of the city. These are both to the west of the terminal, but if you head east you will come to a narrow park that runs along the coastal edge of the city (it begins as Centennial Park and then turns into Myrtle Edwards Park), almost all the way down to Pier 66, actually. It’s an excellent place for a long walk, which might be just the thing to do before confining yourself to your cruise ship. So, there are things to do near Pier 91, but the terminal definitely isn’t by the main sights of Seattle in the way that Pier 66 is.

There are lots of things to see and do before leaving on your cruise from Seattle, but the extent of your options will to some degree depend on what terminal you are sailing from. If you are at Pier 66, you have more than enough to keep you occupied. If you are at Pier 91, you can head to the center of action near Pier 66 if you have time, or you can enjoy the parks in the vicinity of your departing port. Either way, you you’ll have something to do besides sitting on a bench at the cruise terminal.

Article Name
The Port City of Seattle: Things to See and Do Before Leaving on a Cruise
Description
Along with Vancouver, Seattle is the major cruise port of the Pacific Northwest.
Author
All About Cruises and More
Comments: 0 Posted by: Cruiser Evan Categories: Cruise Ports

← The Port City of San Francisco: Things to See and Do Before Leaving on a Cruise
Whale Watching Cruises in California →