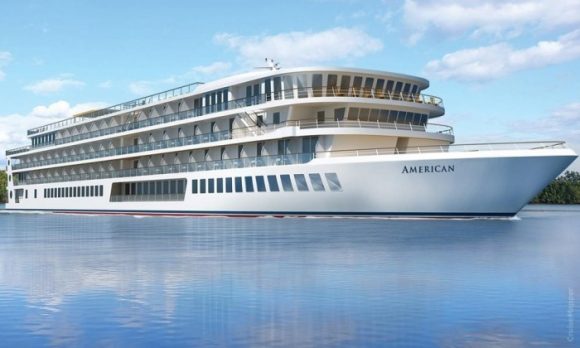 Three cruise companies, Celestyal, American Cruise Lines, and Sunstone Ships, recently announced some major progress on new ships. Whether these ships are still being constructed, being tested, or just being renamed, it’s always exciting to track the progress of the newest vessels in the industry. Let’s see what these companies have in store for us!

Up until two months ago, Celestyal Cruises had only two active ships in its fleet. The small, Cyprus-based cruise line caters to the Greek market, and it is the only cruise line in the area. They are waiting until March 2021 to get back into business, but that doesn’t mean they aren’t working on things behind-the-scenes. They purchased their third vessel from Costa back in August. Previously known as the Costa neoRomantica, Celestyal has now christened the ship Celestyal Experience. In addition to the new name, the cruise line has also begun a number of aesthetic changes to the ship, including adding their logo. It is expected to sail in 2021 alongside Celestyal’s other ships.

American Cruise Lines is a small cruise line (yes, it’s only one cruise line, not multiple) that is focused on bringing riverboats into a more modern context. Their newest ship, American Jazz, will do exactly that. It is set to cruise the lower Mississippi River in comfort and style, with each room featuring balconies and full-size restrooms. American Jazz reached a milestone in its career by successfully undergoing sea trials in early September, meaning that the ship is nearly ready for commercial use. The ship has now been delivered to American Cruise Lines.

Sunstone Ships is not technically a cruise line itself, but rather a China-based company that charters their ships to other cruise lines. Sunstone currently has six ships that are being worked on, and the most recent update from them says that everything is going according to plan. Three ships are expected this year: Ocean Explorer, Ocean Victory, and Slyvia Earle. Ocean Odyssey and Ocean Albatros (not “albatross”) will be completed in 2022, and Ocean Discoverer will be completed in early 2023. Cruise lines ranging from Victory Cruise Lines to Aurora Expeditions will be chartering the ships.

Even though the commercial operations of most cruise lines are still on pause right now, it’s good to see that things are still progressing within the industry. We’re definitely looking forward to seeing plenty of new ships in the coming years!