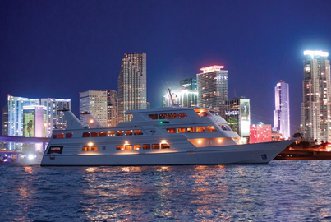 Windridge Yacht Charters is based in South Florida, and its two ships – Lady Windridge and the newly renovated Windridge K – operate out of four cities: Fort Lauderdale, Miami, Palm Beach, and Boca Raton. Fort Lauderdale is where the company is based, and the two ships’ home dock is in Tranquility Marina. All of the cruises that are open to the public (i.e., the cruises that don’t require you to charter the entire ship) are from Fort Lauderdale as well. These cruises include regularly scheduled dinner and brunch cruises, as well as specialty cruises for a handful of holidays (Easter, Mother’s Day and Father’s Day, the Fourth of July, and so on). These cruises can take place on either ship – this information will be listed when you reserve a ticket online.

However, and as we said above, Windridge Yacht Charters is primarily a private yacht chartering company. Basically, they rent out their ships, but the company provides crew and staff for whatever event you have planned. You can plan a menu with the company’s executive chef, decide on entertainment options for your party, and even customize the ship’s decor. You can also map out the cruise route you want to take, at least within certain parameters. Essentially, the yacht is yours during the time you rent it, and Windridge supplies you with the resources and staff to plan your event. As you might expect, chartering one of these yachts isn’t cheap, and essentially any event you plan is going to cost several thousand dollars. Renting the yacht itself for a few hours is quite expensive, and then you have to pay docking and fuel fees, in addition to the cost of food and liquor. The Windridge K ship is considerably cheaper because it is much smaller than the Lady Windridge, but you still probably won’t be renting one of these yachts for anything less than a major personal event (like a wedding) or a corporate party.

More information about the regularly scheduled dining cruises and yacht rentals can be found on the Windridge Yacht Charters website. If you are interested in chartering a yacht, but don’t live in South Florida, you might check out Elite Private Yachts, which operates in several major cities outside of Florida.