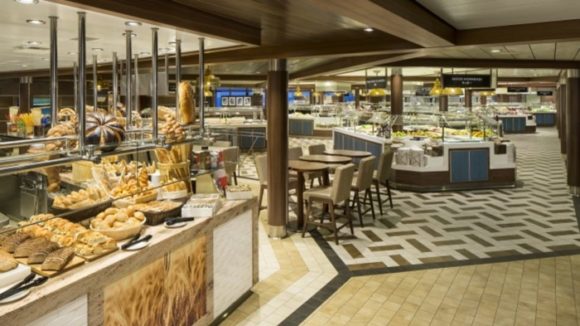 Cruising in the COVID era looks pretty different than before. One of the main changes is the buffets. Many ships have decided to abandon buffets entirely in favor of dining that is safer during the pandemic. But buffets are one of the most popular forms of dining in the entire cruise industry. How long can we expect them to be gone? Are they gone for good?

We first saw restrictions being applied to cruise line buffets back in May of this year. As the CDC started to consider new rules for allowing cruise ships to sail safely, buffets were one of the major issues they were grappling with. To them, a shared eating area where all individuals could touch the same food seemed like a huge danger for the spread of COVID-19. This caused them to implement a new rule that said that all self-service food stations were no longer allowed on cruise ships. Many companies had already made this decision before the CDC ruling, as they agreed that it was a simple change that could drastically increase passenger safety. Since then, nearly every major cruise line that has begun sailing again has shut down their self-service buffets.

An important thing to realize about the many CDC restrictions is that they are not all requirements. Instead, many of them are simply recommendations. If a cruise sails with more than 95% of passengers vaccinated, it can sidestep some of the more strict rules. That includes the buffet recommendation. Most cruise lines decided to go with the recommendation despite it being optional. But most does not mean all. Notably, Carnival decided that they would still have buffets on their ships when they planned their restart in July.

Many of the changes that we have recently seen – such as advanced air filtration systems – are likely to be permanent. But the removal of buffets is unlikely to stay after the pandemic ends. In fact, some cruise lines are already considering adding buffets back to their ships. AIDA Cruises announced on September 17th a variety of updated health protocols, and among them was new rules for their buffets. In short, they are bringing them back! It’s a bit too early to state whether this will be the start of a new trend or not, but AIDA is big enough that that definitely could be the case. If they can prove that buffets are safe, we may see them in more and more ships going forward.

Are you a fan of cruise line buffets? Are you counting down the days until they return? Let us know!