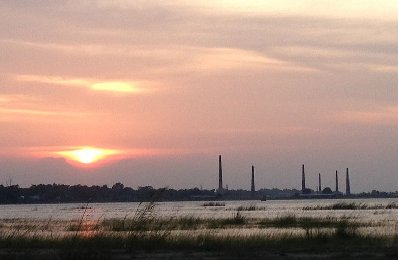 A river ferry carrying anywhere from 140 to over 200 people sank in the Padma River in Bangladesh on Sunday after being struck by a cargo ship. At least 70 people have been confirmed dead, and others are missing. Around 60 people have been rescued. The ferry has now been pulled to the river’s surface and dragged to shore. The phase of the rescue operation involving divers has concluded, but the area surrounding the shipwreck will continue to be monitored for those who remain missing. The captain of the cargo vessel that struck the ferry has been arrested.

Apart from the death toll, which is based on the 48 bodies recovered on Sunday and the 22 bodies recovered on Monday, the precise figures of the disaster remain in doubt because ferries in Bangladesh often lack any record of the passengers on board. Moreover, Bangladeshi ferries are routinely overloaded, as when a ship with an 85-person capacity sank with over 200 people on board last August, killing around 100 people. For the present disaster, the Associated Press is reporting that “up to 140” people were on board, and virtually all major news outlets are running the AP version of the story. However, the Los Angeles Times has their own report, which claims that the ferry was “carrying more than 200 passengers.” Both the AP story and LA Times story were filed from Dhaka, the capital of Bangladesh that is about 25 miles (40 kilometers) southeast of the site of the shipwreck.

Of course, the exact number of passengers on the ferry is vitally important. If the ship had around 140 passengers, than not many people remain missing. A survivor of the shipwreck told a Bangladeshi newspaper that those who were on the deck of the ship survived, and those who were inside were trapped when the ferry sank. The fact that the ship has been recovered and that the underwater area surrounding it has been searched may indicate that the number of missing is few, and thus the death toll may remain more or less steady.

An investigation into the shipwreck has been ordered by the Ministry of Shipping, and hopefully the resulting report will shed some light on what went wrong and account for everyone affected by the disaster.

Article Name
Bangladesh Ferry Disaster Kills at Least 70 People
Description
A river ferry carrying anywhere from 140 to over 200 people sank in the Padma River in Bangladesh on Sunday after being struck by a cargo ship.
Author
All About Cruises and More
Comments: 0 Posted by: Cruiser Evan Categories: Cruise News, Ship Disasters