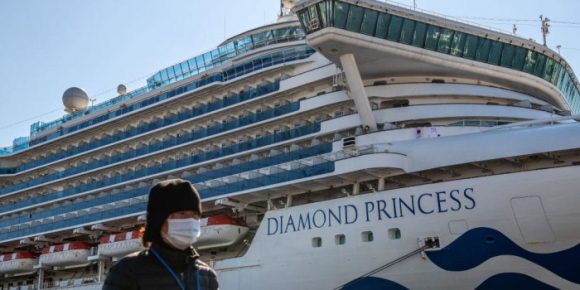 Due to an outbreak of coronavirus on the ship, Diamond Princess has been quarantined in Japan. On Tuesday, February 4, it was announced that the ship would undergo a planned two-week long quarantine period in order to deal with those that currently had the illness and ensure that it wasn’t transferred over to anyone else aboard the ship. The Japanese Ministry of Health, Labour and Welfare were the ones who broke the news, but the quarantine had already been ongoing due to a passenger who left the ship who developed symptoms earlier.

It seems, unfortunately, that this one passenger may have spread it to many others. At this point, a total of 135 people have been diagnosed with the SARS-like illness. Of those diagnosed, most have been Japanese, but a good amount have been American as well. The testing is happening as the ship is docked in Japan. It’s unsure how many people have been tested thus far, but it’s likely not everyone.

While you might think that only the sick need to be quarantined, it looks like it’s really the exact opposite. Those who have been determined to have the illness have already been taken off the ship, while those who are yet to be tested are stuck in their rooms for a bit. It’s a sorry situation, to be sure, but it’s helpful in guaranteeing that the virus doesn’t spread more than it has to. Half of the guests aboard the ship are Japanese, while the other half find themselves stuck on a quarantined cruise ship thousands of miles from home.

Luckily, it seems Princess is taking the comfort and happiness of their passengers pretty seriously. The internet has been made complimentary, as well as phones, which at the very least keeps the guests in communication with family members. Additionally, TV channels and movies have been added into the rooms for a bit more varied entertainment. Linens are being regularly delivered to guests, as well as any food that is ordered off the menu (although it should be noted that options are being limited). Finally, prescription medication that guests need are being procured by the cruise line, with the costs being covered by them as well. So, definitely no fun, but Princess is at least making it livable.

Despite this, they’re keeping a tight ship over there on that, uh…ship. Security patrols the hallways to make sure that guests aren’t sneaking out and sneakily infecting anyone. The only time people are let out are in supervised groups that need to keep a healthy distance away from one another. This lets them access the outside world, at least for a bit. In a press release, they said that they intend to “fully cooperate with and follow the instructions of global medical authorities and the Japanese government.”

It’s not a zombie apocalypse, but it’s still kinda scary. We’re hoping that Princess is able to sort out the situation and get people home safely. But hey, if not, free TV, right? Yikes….

← Spend Valentine’s Day on a Cruise This Year!
Cruises BANNED in Taiwan! →