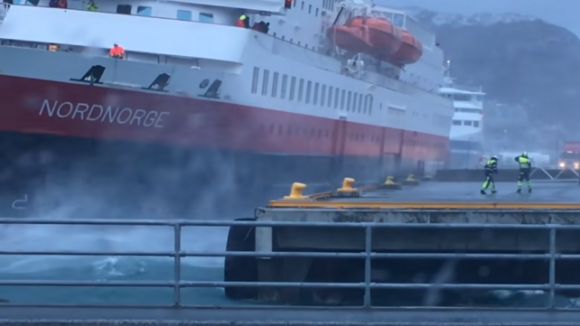 In a very shocking video taken by a bystander, a Hurtigruten ship is seen fighting against strong winds and nearly colliding with a pier. The ship, MS Nordnorge, was in Norway when an incredibly strong wind storm hit, forcing it to anchor amidst the gales. In the video, it’s pretty clear that the vessel is struggling: it’s moving erratically and headed towards a dock. Several people are standing by and watching the event unfold. Luckily, no damage occurred, and everyone was completely safe. Still, it looked like a very wild ride, to say the last. You can check out the video for yourself over here.

It’s pretty rare to see a ship this size deal with conditions this severe, but that seems to be the case in Norway right now. It was reported that winds in Bodo, Norway reached up to 69 miles per hour, which is very, very fast. MS Nordnorge had to drop some of its ports and shift around its itinerary in light of the storm, which was probably wise. Apparently, a different Hurtigruten ship said that elsewhere in Norway were waves that reached up to 65 feet.

It seems that, beyond the shocking video, Hurtigruten is definitely hurting (no pun intended…well, nevermind, we guess it’s intended) across Norway. MS Lofoten had to cancel part of its 12-day itinerary at the end of January. It sailed through sheltered, safer waters instead, and the company offered travelers free flights if things got really bad. Another ship, MS Nordlys, also experienced delays due to the storms.

Hurtigruten can’t be too happy, but the citizens of Norway aren’t exactly pleased either. Among other difficulties, lots of road closures, accidents, and ferry cancellations have left several cities and towns isolated. The Norwegian Public Roads Administration offered the following advice: “Motorists must take it easy and drive according to conditions. Have enough fuel, something to eat and something hot to drink. You could be still for a long time.” That’s no fun. The winds are apparently raging anywhere between strong gale force and hurricane force.

While Nordnorge was lucky to not hit the dock and cause any damage, there is a bit of a precedent for a such a thing happening to cruise ships. In 2019, the MSC Opera hit a docked tour ship and the dock itself, causing a handful of injuries. This was due to a technical issue, however, not weather. While it’s rare for accidents to occur on cruise ships, they definitely can happen. We’re glad everyone on the Nordnorge (and near it…) was completely fine!