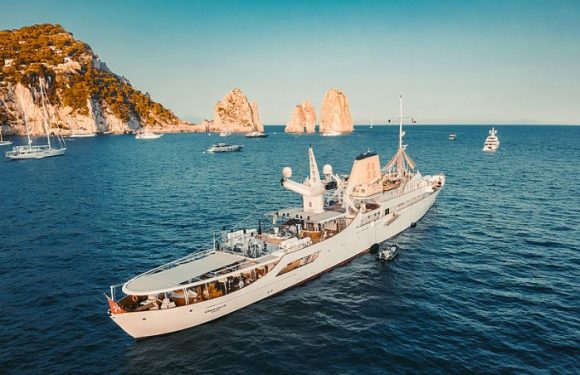 Whatever Happened to Aristotle Onassis’ Yacht the Christina O?

Aristotle Onassis is a name that holds weight in the shipping world. In his life, he was one of the richest men in the world and had a relatively impressive collection of ships and yachts. And by relatively impressive, we mean that it was the biggest private ship collection…ever. The crowning jewel of this collection was the legendary Christina O, one of the largest yachts in the world. After an illustrious life with Onassis, the ship more-or-less disappeared off the map. If you’re curious about whatever happened to it, let’s figure it out, because it’s one ship that has had a pretty interesting life.

The Christina O, long before it was known as a superyacht, was actually a ship that served in the Canadian Navy during World War II, known as the HMCS Stormfront. At the end of World War II it was no longer in use by the Navy, leaving it up for sale, at which point Onassis purchased it for $34,000, which was just the price of the scrap metal. $4 million worth of renovations later and it became luxurious enough that Onassis was basically living there all the time. It was also widely recognized as a prestigious place for guests to be entertained, and Onassis did this often. Winston Churchill, Frank Sinatra, and even JFK were all aboard the Christina O at one point. And of course somewhere in there Onassis married JFK’s widow, Jackie. Go figure.

When Onassis died in 1975, the ship didn’t have much of a purpose. Rather than see it lay idle, Aristotle’s daughter Christina (who the ship was named after) elected to donate it to the Greek government for the president to use. However, it didn’t stay there for long, as a separate shipping magnate named John Paul Papanicolaou purchased it from the government in 1998 for a total of $50 million. He began restoring it to its former glory, a process which continues basically to this day, as it saw further renovations in 2015 and 2017.

Decades after Onassis’ death and after years of being virtually forgotten, the Christina O is back in the limelight once again. The ship is now open to be rented out. Anyone interested in the history (and extreme luxury) of the yacht can actually experience it themselves, although they need to have about $100,000 for a day on the vessel. It has a large variety of amenities and can fit about the perfect number of people for a party, if you’re interested!

While it took it a while to come back around, the Christina O seems here to stay. We don’t have the funds to rent it (yet…), so if you know anybody who just happens to be having people on it, toss us an invite. They can check it out over here.

Article Name
Whatever Happened to Aristotle Onassis' Yacht the Christina O?
Description
This is one ship that has had a pretty interesting life.
Author
Ben Mangelsdorf
Comments: 0 Posted by: Ben Mangelsdorf Categories: Everything Else, luxury cruise, Misc. Cruises