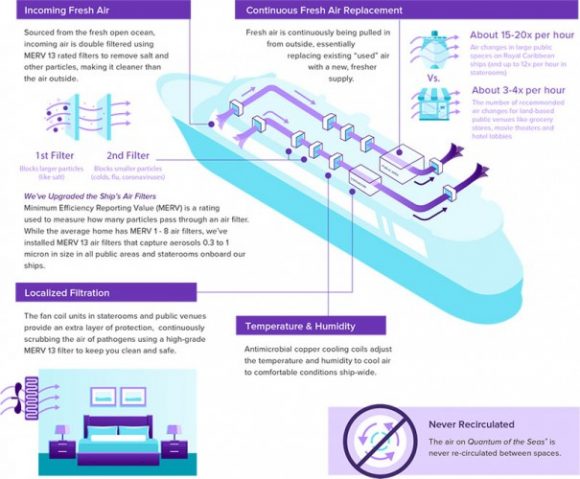 Newly designed air filtration systems are starting to be implemented by several major cruise lines in the industry. Costa was one of the first companies to implement them when they started sailing with new filters on their ships in September. Royal Caribbean and MSC have both now announced plans to upgrade their filtration systems as they work towards being able to sail again. What do these new systems look like, and why are they so important?

The importance of good filtering

The air filtration system on cruise ships have been facing criticism since before the coronavirus pandemic. There were a few outbreaks of norovirus on cruise ships a few years back, and some medical professionals began to say that increased air filtration could result in less spread of the virus. They realized that norovirus travelled through the air, meaning ships could be made safer if old air wasn’t constantly recycled throughout the ships. One article written in 2012 even wrote that “the HVAC [heating, ventilation, air conditioning] system is one possible source of contamination on cruise ships.” Improvements in the HVAC systems on ships could result in fewer norovirus contaminants being circulated throughout the ship. And because coronavirus behaves in the air in a similar way to norovirus, it makes sense that air filtration is one of the first places on their ships that cruise lines would look to improve.

Royal Caribbean took these notes about cruise HVAC systems to heart when developing their new air filtration system. Rather than recycling air repeatedly, Royal Caribbean ships will now supply all rooms with fresh ocean air multiple times an hour. This will be accomplished by taking in air on one side of the ship, sending it throughout all staterooms and public spaces, and then exhausting air out of the other side of the ship. In addition to this, they are using new filters in their HVAC system. These filters reportedly “capture aerosols 0.3 to 1 micron in size – fine enough to filter coronavirus, colds and flu,” according to the company via a statement. It has been confirmed that these changes will be on Quantum of the Seas when it sails from Singapore in December. It is also expected that the rest of the fleet will feature these changes when they return to sailing.

MSC is also upgrading their HVAC system, but they are doing it in a drastically different way than Royal Caribbean. Rather than removing used air and using incredibly fine filters, they plan to use UV light. UV-C lamps will be used in their air conditioning system to destroy all organic matter, including “viruses, bacterias, and mold,” according to a statement from the cruise line. It doesn’t seem they have plans to add this system to their old ships as of now, however. Instead, it is being built into their new ship, MSC Seashore, which is currently being constructed in Italy at the Fincantieri shipyard.

It is clear that upgraded filtration systems can greatly reduce the risk of coronavirus transmission on cruise ships. MSC and Royal Caribbean have very different ways of doing just that, but we can expect cruise lines to adopt measures like this in the future.

Article Name
Are New Air Filtration Systems the Key to Making Cruises Safe?
Description
What do these new systems look like, and why are they so important?
Author
Ben Mangelsdorf
Comments: 0 Posted by: Ben Mangelsdorf Categories: Cruise Lines, Cruise News, Royal Caribbean Cruises