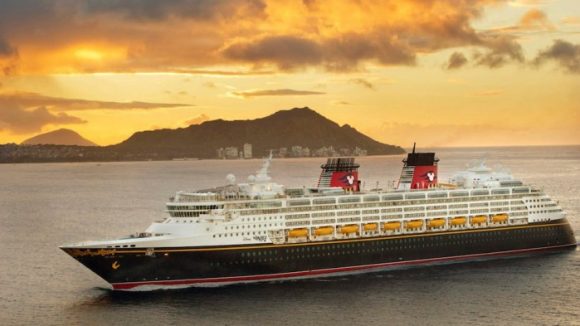 A Look at Disney Cruise Line’s Next Ship, Disney Wish

The time is slowly ticking down until Disney Wish is introduced to the world. It is set to be the first addition to Disney Cruise Line’s fleet since Disney Fantasy was unveiled in 2012. Let’s get excited for this new ship by taking a look at all of the details that we have so far.

There are still a large number of unknown details about Disney Wish, but we have a general idea of what to expect. The ship will be in the Triton class and will clock in at 144,000 tons, making it the largest ship in the Disney fleet by a good amount. The previous two ships in the fleet, Disney Dream and Disney Fantasy, are both in the same class and check in at only 129,690 tons. Disney Wish won’t be at the absolute cutting edge in terms of cruise ship size, but it will still be able to accommodate lots of passengers very comfortably. In fact, there will be a total of 1,250 staterooms, giving the ship a max capacity of somewhere between 2500 and 3500 guests. It will feature 11 decks and will be powered by liquefied natural gas – an exciting first for the cruise line.

Due to the pandemic, Disney Wish has had a bit of a longer history than the cruise line was initially hoping for. It was announced back in early 2016, and work began at the Meyer Werft shipyard soon after. The ship was slated for a debut in January 2022, but coronavirus-related delays in construction caused Disney to push that date back to June 2022. Disney had announced in 2019 that reservations on the ship would be available in late 2020, but that didn’t happen for obvious reasons. We still don’t actually have any idea of the itineraries that the ship will be sailing in summer 2022, and reservations are not yet open.

Okay, let’s get to the fun stuff. Disney Cruise Line ships are all unique in how they interpret and utilize the brilliant Disney universe of characters, and Disney Wish is no exception. It will feature Rapunzel as its main mascot, but it will also incorporate a variety of other Disney stories in its decoration. Captain Minnie Mouse will make an appearance, and there will be a large statue of Cinderella within the Grand Hall of the ship. The Grand Hall is also set to based on the idea of a fairytale castle, something which is sure to enchant anyone who steps on board. The general theme of the ship was explained by a spokesperson for the company. They said, “For the Disney Wish, we are creating a signature design language that exudes this emotional magic like only Disney can, by infusing every inch of this enchanted ship with more Disney stories and characters than ever before. The Disney Wish will be a place where families really do get to wish upon a star.” Sounds fun to us!

It seems that Disney is taking some steps forward in the rollout for Disney Wish, so expect to hear some more news soon. We’ll keep you updated on when bookings are finally available on this magical ship!