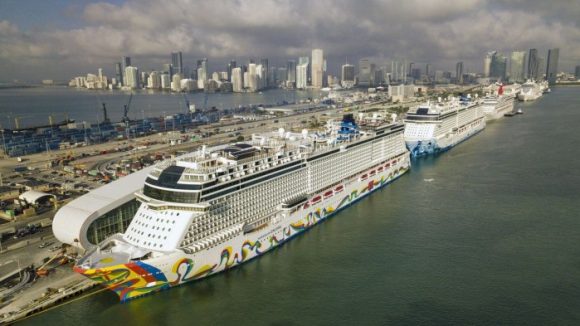 The Latest Updates on the Push to Resume Cruising in the U.S.

The biggest story in the cruise industry right now is the push for the CDC to allow cruising to resume in the U.S. Politicians and cruise industry insiders alike have been putting pressure on the CDC. The Conditional Sailing Order is still in place at the moment, but there have been some updates. Here’s the latest.

Politicians respond to potential re-opening of the cruise industry

It should be clear by now that there is lots of support for the U.S. cruise industry to resume service. There are opponents of this idea, however, and they are starting to speak up. On April 15th, Congresswoman Matsui and Senator Blumenthal sent out a letter to the CDC asking them to not ease up on the current restrictions. The letter said that “prematurely lifting restrictions on cruising – with thousands of people in close proximity and conditions ripe for spread of infections – threatens a serious setback” in the progress we have made towards ending the pandemic. While the letter did not directly cite recent efforts such as the CRUISE Act, it is easy to believe that this played a large role in spurring Matsui and Blumenthal to action. It should be noted that both of these politicians have a history in working on law to improve healthcare and general safety on cruise ships, giving them a good understanding of the subject.

On the opposite side of the coin, Norwegian joined in the long list of cruise lines waiting on an answer from the CDC. They sent a proposal on to the CDC on April 5th asking permission to resume sailing in July. The proposal outlined their plans for keeping travelers and port communities safe. According to a statement from Norwegian, their proposal differs from the CDC’s Conditional Sailing Order in an important way: it requires all guests to be vaccinated. They have yet to receive a response. Frank Del Rio, the president and CEO of Norwegian, said, “I continue to await further discussion with the CDC and I am respectfully requesting a prompt response to my written proposal to recommence cruising in July allowing us to join America’s national reopening.”

There is some positive news from this week about a potential resumption of sailings. The CEO of Royal Caribbean said that the CDC “is engaging in a constructive dialogue with the cruise industry.” While the details of these discussions aren’t currently known, Cruise Industry News reports that “the CDC has stated that cruising could return as early as mid-July.”

As has been the case since the start of the pandemic, we’ll just have to wait and see if any real progress is made. Things are looking hopeful now, however, and a dialogue between the CDC and the cruise industry can only be helpful.

Article Name
The Latest Updates on the Push to Resume Cruising in the U.S.
Description
The biggest story in the cruise industry right now is the push for the CDC to allow cruising to resume in the U.S.
Author
Ben Mangelsdorf
Comments: 1 Posted by: Ben Mangelsdorf Categories: Cruise Lines, Cruise News

← Why You Should Take a Cruise to Lisbon, Portugal
When to Expect the Debut of the New Cordelia Cruises →